Want to know Coco Chanel? An artist who changed fashion and mentalities.

On 10 January 1971, Coco Chanel died at the Hotel Ritz in Paris. To remember her is to remember her innovations in the field of fashion but with an influence in terms of behavior and mentality.

She was truly an avant-garde artist. Many of her creations were characterized by rupture and provocation in relation to established canons and she opened the way to the Art of Fashion.

Some of her innovations have become timeless such as the flowing male cut models, the “tailleur” and the black dress.

(“Gabrielle is not only the famous “coutouriére” Coco Chanel. Her passionate, audacious and avant-garde nature has made her a multifaceted character“).

Gabrielle Bonheur Chanel was born in Saumur, on August 19, 1883. Her mother was a laundress and her father was a clothing merchant. She had five more brothers.

In 1895 her mother died and Grabielle was taken to a Catholic orphanage where she remained until 1903. At the age of eighteen she went to live in a Catholic pension at Moulins and started working in a sewing workshop.

Around 1907 – 1908 she was a singer in a cabaret having adopted the name Coco Chanel. In 1910, she started living with the English industrialist, Arthur Capel, who supported her in the opening of her first store, “Chanel Modes”, a headgear that quickly expanded into the fashion business. Capel died in 1919 in an automobile accident.

During World War II, during which she became involved with a German officer, Coco Chanel reportedly struggled to maintain her House, which reopened in 1954.

The break with the corset

Coco Chanel’s creations at the beginning of her styling career affirmed a new feminine way of being and dressing.

Breaking with the corsets and uncomfortable clothes that came from the end of the sec. XIX her creations were fluid, with light and comfortable fabrics and sometimes inspired by the masculine cut. 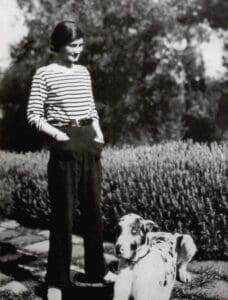 The timeless Chanel “tailleur” was introduced in the period of the 1st world war (1916) and has been part of the Chanel collections since that time. The images of great figures of society with this skirt and coat are iconic. 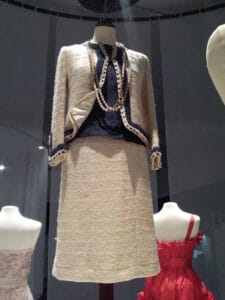 Jacqueline Kennedy with a  tailleur Chanel- 1963

Nowadays it is perfectly normal for the fashion houses and stylists to create fragrances and make-up as well. Coco Chanel was the first to create perfumes and her Chanel nº 5 (for being the fifth fragrance she created), “a perfume with a woman’s scent”, launched on May 5, 1921 has become timeless.

Chanel No. 5, in an Art Deco bottle, was incorporated into the permanent collection of the Museum of Modern Art in New York in 1959.

“A woman needs only two things in life: a black dress and a man who loves her”.

In 1926 black was almost reserved for men, widows and uniforms for domestic workers. The simple black-cut dress presented by Chanel has become basic in any women’s wardrobe today.

Get to know the collection Chanel at Met Museum

Know more about Gabrielle in the web site