What is mummification in ancient egypt

The mummification and the Ancient Egypt religion

For a long time, in the Ancient Egypt religion , it was believed that only Pharaohs  and their relatives would need their earthly bodies.

For this reason, only they were mummified.

Later, they extended the ritual of mummification to other social groups and even to animals that were considered sacred.

The embalming process is now known thanks to the Greek historian Herodotus (born in the 5th century B.C.) who described the process in detail in his Histories.

In the 4th century B.C., the bodies were buried in the desert, in the warm sand that would eliminate the moisture from the bodies and help with putrefaction.

When the corpses began to be placed in a coffin and in a tomb, artificial mummification arose in Ancient Egypt religion.

Professional embalmers followed a series of rituals, after agreeing with the family the type of embalming and the price. 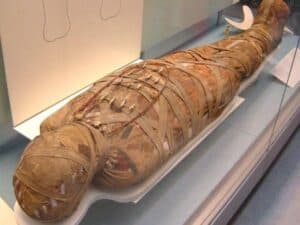 The 70 days of the mummification process

According to Herodotus, the whole process normally took seventy days and began with the purification of the deceased for three days.

It was followed by the extraction of the brain through the nostrils, with the help of an iron hook.

The brain was of no importance to the ancient Egyptians and therefore they made no effort to preserve it.

The empty skull was filled with a resinous liquid that solidified when cooled.

This was followed by a cut on the left side, through which the internal organs were removed, always leaving the heart to be weighed in the afterlife.

The whole process was always supervised by the “Lord of Mysteries” who wore the mask of Anubis, god of embalming.

They cleaned and washed the body, and filled it with straw, myrrh and cinnamon.

Then, they covered the whole body with natron, to dehydrate it, remaining like this for about forty days.

After this stage, the body was greased with oils and liquid resin to recover its elasticity.

The deceased were then wrapped several times in linen bands with amulets and papyruses with texts, while magic formulas were recited by the reader priests.

The body parts were wrapped separately and in a compact way, taking this process fifteen days to be completed.

The organs that were removed from the body were mummified separately and kept in four canopic jars – each with a different lid to store the respective organs.

At the end of the process, the body belonging to the elites was handed over to the family with a mask, inside an anthropomorphic coffin and then placed in a sarcophagus.

A funeral procession was carried out from the place where he lived to his last address, with offerings of food, flowers and furniture and with the presence of his family and professional mourners.

Finally, he was placed in the tomb together with the jars, his belongings (jewels, personal objects, weapons, vases, fans, furniture, protective statues…).

A box with shabtis – small figures that would serve the deceased in the afterlife – and was sealed in the funeral chamber.

You can watch the mummification process in this Getty Museum animation

Discover the fascination of Ancient Egypt in the online course

At the end of this course, participants will get to know the Ancient Egypt religion and  civilization, its culture, beliefs and architecture.

In addition to the great monuments and religious aspects that mark this civilization, aspects of daily life such as fashion, food and hobbies will be addressed.

What students say about the online course Ancient Egypt – culture, beliefs and art