When the Sahara was green – african rock art

african rock art | 12,000 years ago, at the end of the last Ice Age, the Sahara was a vast savanna crossed by large animal herds. With several lakes filled with fish scattered around and inhabited by semi-nomadic and pastoral communities.

Rock art in the region is extremely rich because it provides us with an entirely different panorama of the region from the one we know today.

More than that: it reveals a long-gone culture of communities that developed animal domestication and agriculture in the region.

In Wadi Sura (Egypt), in the mountains of Gilf Kebir, east of the Sahara, african rock art is truly a historical record of life in the region about 8000 years ago. Today a water scarce region of sand dunes, once a landscape full of animals, plants and lakes illustrated in ancient local rock art. One extraordinary example is the Cave of Swimmers where we see human figures swimming.

The african rock art in the Sahara is also a register of a historical time when the region appealed to animals that still exist today in sub-Saharan Africa. There are antelopes, rhinos, giraffes, lions, elephants, ostriches, hippos and crocodiles, and the already extinct Bubalus, a wild species similar to bisons, which vanished from the face of the earth some 5000 years ago. Thus, representations of Bubalus determine its date (over 5000 years) and are grouped in what scientists call the Bubalus Period.

Also from this period are representations of very large animals in contrast with tiny human figures.

The study of other pictographs and petroglyphs spread around the Sahara by archaeologists and art historians, helped to build a chronological sequence that shows a culture developed around animal domestication. Between 5000 and 2000 BCE, the Pastoral Period corresponds to a time of climate and social change. Human figures get bigger and animals are mostly cattle herds although wild animals occasionally appear.

The Horse Period follows the Pastoral Period with representations of carriages and warriors when Egypt was already a powerful civilization.

Finally, around 2000 years ago, the Camel Period, when representations of this animal predominated showing its importance for the nomadic communities born out of desertification. 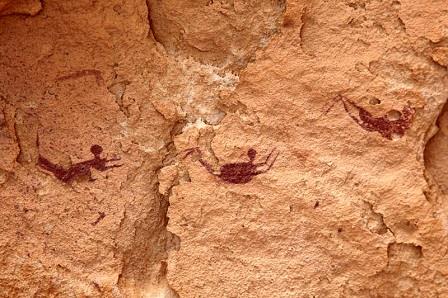 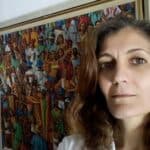