Why take an iconography course online?

Why take an iconography course online ?

The iconography course online is intended for professionals who are engaged in activities related to History and Art History, Museography, Conservation and Restoration, Tourism professionals and all interested in the subject.

However, it is perfectly suited to anyone for those who are interested in the themes and want to increase their culture about history, art history and hagiography.

Why is iconography important in art analysis?

From the beginning, Christianity has made use of symbols to tell the stories of the saints and martyrs.

As a means of educating the faithful, who generally did not know how to read, the Saints were identified with an iconic motif associated with their lives, which is called an attribute. The same happens with the depiction of episodes of their lives: there are symbols and actions which give it context, thus allowing its identification.

In the course of the Art History studies, a scientific approach was developed to read these attributes, which was called Iconography – the study of icons or iconography in art analysis.

Iconography is a form of visual communication that makes use of the image to represent something.

let’s see an example: the Tetramorphos

The representation of the Four Evangelists.

These have a particularly rich iconography, due to their participation in the production of the Bible. So, over time, they can be represented as individuals or as a group, in a very interesting format.

We can identify, firstly, God in the First Person (centered), distinguished by his triangular nimbus (symbolical of the Holy Trinity). He is surrounded by three animals and, facing him, an Angel. Knowing the Gospel, we can realize that God is in fact surrounded by the Four Evangelists. These often appear represented not only as the men they were, bearing certain objects as their attributes, but also as animals (and an Angel, in the case of St. Matthew), symbolism related directly to the Gospels of Christ.

Thus, this form of representation, called Tetramorphos (from Greek tetra: four, and morpho: shape), will replace the traditional image of these Apostles, stressing their importance in spreading the Word of God through the Gospels.

The Tetramorphos consists of an Angel, a Lion, a Bull and an Eagle. These representations are directly linked to the corresponding Gospel of each Apostle, like so:

– the Angel (or a Man) represents St. Matthew, who defended the humanity of Christ through his testimony. St. Matthew symbolizes the Birth and must be placed to the right of Christ/God;

– the Lion represents St. Marc, because his Gospel begins with the prediction of John the Baptist («the voice that cried from the desert»). It symbolizes the Resurrection and is also placed at the right hand of Christ;

– the Bull represents St. Luke, who speaks of the sacrifice of Zechariah, father of John the Baptist (the animal chosen for the sacrifices was, generally, the bull). Furthermore, St. Luke speaks extensively about the sacrifice of Jesus on the cross, thus symbolizing the Passion of Christ. He is located to the left of Christ;

– the Eagle represents St. John, which begins his Gospel in the sky, focusing on the spiritual. Also, according to the bestiary, the Eagle is the only animal that can face the Sun, which in this case is symbolic of the Divine Person. The Eagle is represented on the left, above the Bull.

In addition to the Tetramorphos, these Apostles can be presented simply sitting or writing their Gospels, alongside with their symbolic animal. Sometimes, an Angel seems to whisper in St. Matthew’s ear. St. Marc may also be represented through episodes narrated in the Golden Legend, as the transfer of his body to Venice or the episode of the Miracle of the Slave, and St. Luke as a painter (image bellow), metaphorically alluding to the fact that it was he who best portrayed the Virgin Mary in his writings. 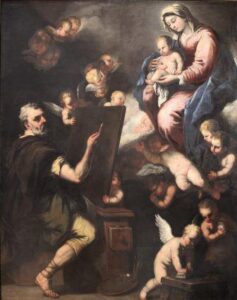 In the iconography course online you will find:

At the end of the iconography course online (Iconography of the Saints), the participants will be able to apply methods of iconographic analysis and recognise symbols and attributes of the Saints, through practical exercises and other resources for future use.