George Eastman – 1888 – Photography is for everyone!

Kodak No. 1 was born and the democratization of photography began.

Can you imagine yourself today without having, in the palm of your hand, the ability to take a picture immediately, save it, or share it in the same instant?

We have to thank George Eastman who patented the first camera for amateurs and launched, 134 years ago, the principle.

“Photo cameras for everyone”.

In 1880 in the United States, George Eastman began producing glass negatives in his mother’s kitchen.

As sales grew, he founded his own company – the Eastman Kodak Company – which became a powerful multinational in the area of photography.

He also developed the concept of the camera, creating simpler, more affordable devices that produced photographs of quite acceptable quality. 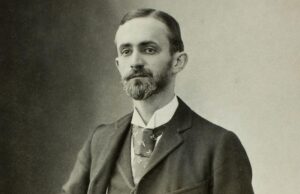 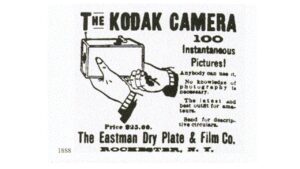 In 1888, George Eastman introduced a much more user-friendly camera.

He thus opened up photography to a wide, amateur audience.

The patenting of the first roll camera, the Kodak No. 1, on September 4, 1888, was thus the milestone in the democratization of photography.

Kodak No. 1 had a fixed focus and exposure and was sold with a roll of paper for 100 photographs (Eastman American Film), in a circular format with 63mm diameter. 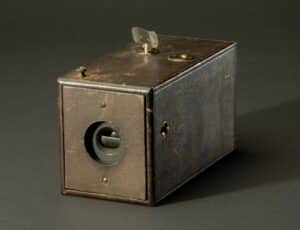 The Kodak camera process was limited to 3 operations: arm the shutter, advance the film and shoot.

Photography became much more accessible and easier and amateur photographers increased in number, as did sales.

Once the roll was exposed, it was sent to the factory where it was developed and the negatives printed on paper (later on film).

The camera was returned to the owner with a new roll, along with the proofs and negatives from the previous one, duly processed. 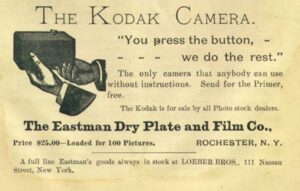 Learn how to preserve your old paper photographs and negatives in the online course.

In 1889, Eastman launched Kodak #2, which also produced circular images, but 89mm in diameter.

Thanks to this success the price of the cameras was reduced.

In 1900 Kodak launched the Brownie, a camera for children that produced 6 pictures and cost only 1 dollar. 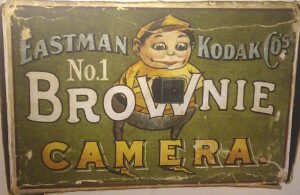 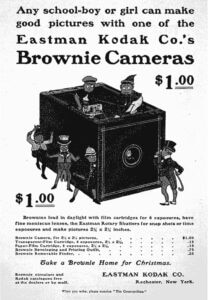 This success was followed by other companies in Europe.

This was just the beginning of the democratization of photography.

Cameras have been adapted over the course of history.

They became more and more compact and easier to use.

The road to digital photography still took a few decades.

We can say that digital photography began with the creation of the CCD at Bell Labs by two inventors, George Smith and Willard Boyle, in October 1969. 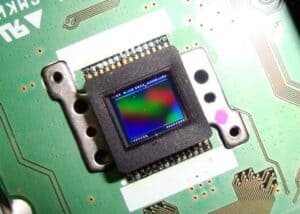 A CCD image sensor, from a digital camera.

They drew up the basic outline of the CCD structure, defining its operating principles and applications (which included image reproduction and memory).

In 1970, Bell Laboratories incorporated the CCD into the first video camera.

They also enabled innovations in science, particularly in medicine and astronomy.

Apart from being an image, a photograph is a palpable object, which occupies a place in space.

It requires specific attention, through its physical and chemical composition and the weaknesses that this may entail.

In the Conservation of photography online course you will learn how to develop and maintain a preservation program for the photographic collections.