In this article we will know the first christian symbols – in the Roman catacombs of the 2nd and 3rd centuries AD.

This theme is developed by Yolanda Silva in the Online Course: Iconography of the Saints

The presence of symbols is common to various societies and religions.

The Christian religion brought forward the idea of materializing divinity, in continuity of the idea of the incarnation of God in the figure of Jesus Christ, thus reversing the trend of an iconoclastic religion.

The idea of creating archetypes within the religion became understood as a form of paying homage to a particular religious figure, through its materialization. This elevates its importance, unlike the previous thought that dictated that we should not veneer an object, such as a religious figure.

How do we know the first christian symbols

Before the year 313 AD, when Constantine legitimized the practice of Christianity in the Roman Empire, through the edict of Milan, the first Christians disguised their religious practices by using certain christian symbols .

These would help them identify each other and avoid the persecutions and martyrdoms.

The Roman catacombs of the 2nd and 3rd centuries AD document the early centuries of Christianity, providing us with some important information about the first symbols used.

Based on reliefs found in the catacombs, we can observe that, for a long time, the most common symbols are the anchor, the trident or the ship, because it was easy to disguise a cross in these representations. 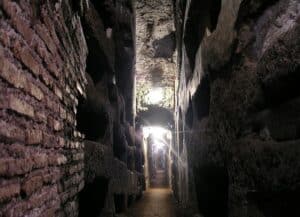 Symbols were found side by side with tombs, being the more common the following:

– monograms as the Chi-Rho or IHS, 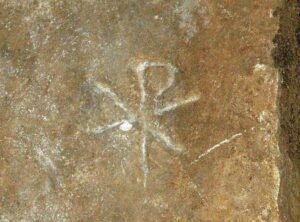 – common representations that replace the cross, as the anchor or the ship, 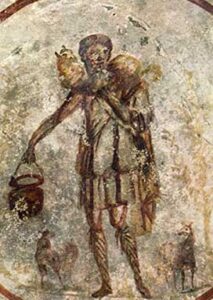 – the figure of the Prayer (or Orans),

– the Ichthus or Ichthys (the fish),

-the peacock and the dove, 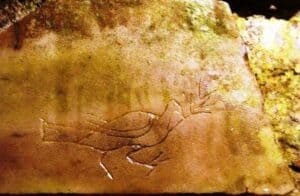 – the palm leaf or branch,

-and, finally, though much later, the Cross itself.

In the Online Course Iconography of the Saints the participants will be able to apply methods of iconographic analysis and recognise symbols and attributes of the Saints, through practical exercises and other resources for future use.

Want to learn more about iconography and art analysis?