Joan of Arc – who was this 19 year’s old heroine who inspires everything from famous paintings to video games?

Joan of Arc (c. 1412 – 1431). This peasant woman, heroine in the 100 Years’ War and French saint has inspired all kinds of artists throughout history.

From painting and sculpture to literature, music and theater, passing through cinema, illustration, anime and videogames, we find representations of this young woman who died at just 19 years old in the bonfires of the Inquisition.

Who was this heroine and how her trial and inquisitorial process took place are some of the aspects that we will see in this article. 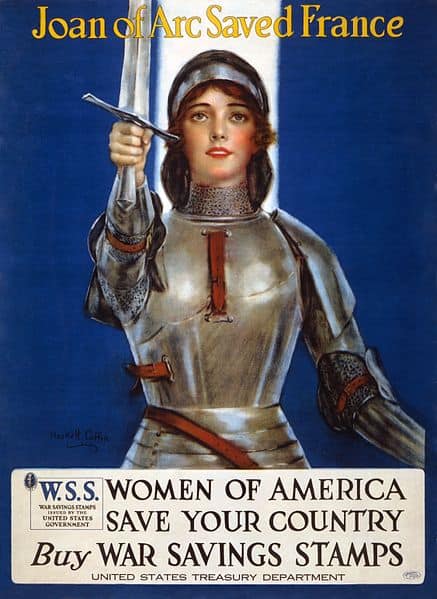 Joan of Arc – the heroine

She was born during the Hundred Years War between France and England that tooked place in the 14th and 15th centuries. Based on England’s claim to the French throne and crossed by several conflicts between royal houses and claimants to the french throne.

Between 1407 and 1435 a dynastic crisis also generated a civil war that opposed the Armagnacs (House of Orléans) against the Burgundians (House of Burgundy).

The as-yet-uncrowned Charles VII led the opposition to England.

And it was around this time that the young Joan of Arc, leading an army of peasants, played a leading role in the Battle of Orleans. In nine days of battle the English were defeated and Orleans freed from the siege that ran from October 12, 1428–May 8, 1429. Charles VII was crowned in 1429.

Joan’s military feats galvanized the national feelings of the French and the young woman was elevated to the status of a hero. 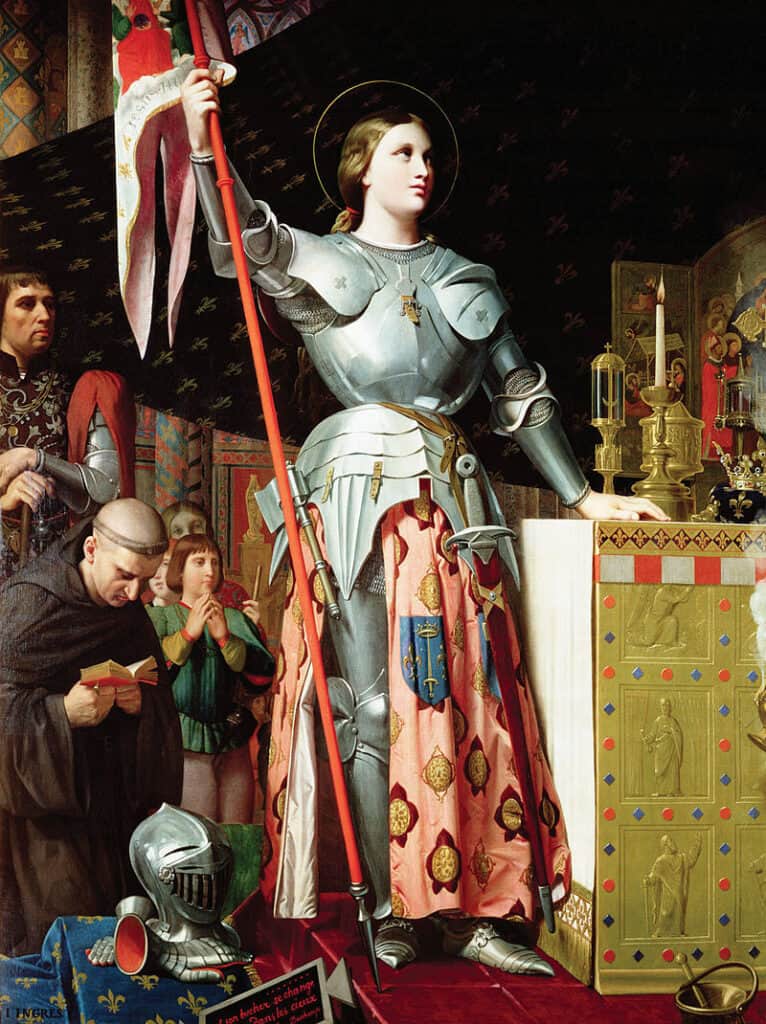 Joan of Arc at the Coronation of Charles VII, by Jean Auguste Dominique Ingres (1854)

Joan of Arc – the martyr

On May 23, 1430 she was captured by the Burgundians, on January 9, 1431 her trial began on charges of witchcraft led by the Bishop Pierre Cauchon.

Joan claimed to receive divine visions from the archangel Michael, Saint Margaret and Saint Catherine, and that they were the ones who gave her instructions to support Charles VII.

It is worth looking at the trial of Joan of Arc, which reveals some 15th century superstitions and where the real and the imaginary are intertwined. That’s what we’ll do next. 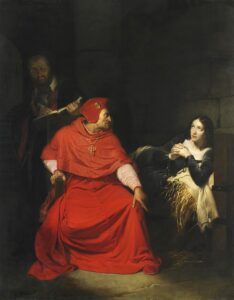 The trial of Joan of Arc Paul Delaroche 1824

The trial of Joan of Arc

The inquisitorial process of Joan of Arc (15th century).

Well, in this process, according to some authors such as Mª Luisa Bueno Domínguez, we have a whole compendium of superstitions that lasted into the 15th century and where real and magic intertwine and come together:

• The presence of the forest as a magical place in which the saints appear to Joan, specifically the Chenu forest in Domremy. Where, according to popular beliefs, there was a tree belonging to fairies and a fountain with healing properties.

• The ring [1] (which was stripped and on which the names of Mary and Jesus were engraved) and the sword (found behind the altar of the Church of Santa Catalina de Fierbois), to which are attributed magical and healing properties.

Let us see, then, a fragment of the interrogation of Joan of Arc, in which these ideas are clearly observed: (Bueno Domínguez, 2003)

As can be seen, in the trial of Joan of Arc there are elements related to popular-pagan beliefs and which, in turn, were fundamental for her to be accused of witchcraft.

However, what we also see in Joan of Arc is a woman who breaks the established rules and an uncomfortable character: she adopts the functions that the man presupposes (strength and the military/warrior role). 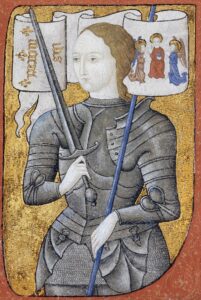 Furthermore, we know that har figure was fundamental in the last stage of the Hundred Years’ War and in the coronation of Charles VII.

• Woman who breaks the established patterns.

• Uncomfortable character: adopts the functions that are assigned to man: strength and military/warrior role = role change.

• She fulfills the task assigned to her by various divine voices (St. Catherine, St. Margaret and St. Michael) and God:  lead an army to expel the English from France.

• Her figure was fundamental in the last stage of the Hundred Years’ War: after being rejected on several occasions and being examined by theologians, Carlos granted her the command of an army with which she managed to defeat the English in several campaigns.

• Finally, Charles was crowned Charles VII, and Joan, after several defeats, was convicted of witchcraft and burned at the stake in the Place de Rouen on May 30, 1431. 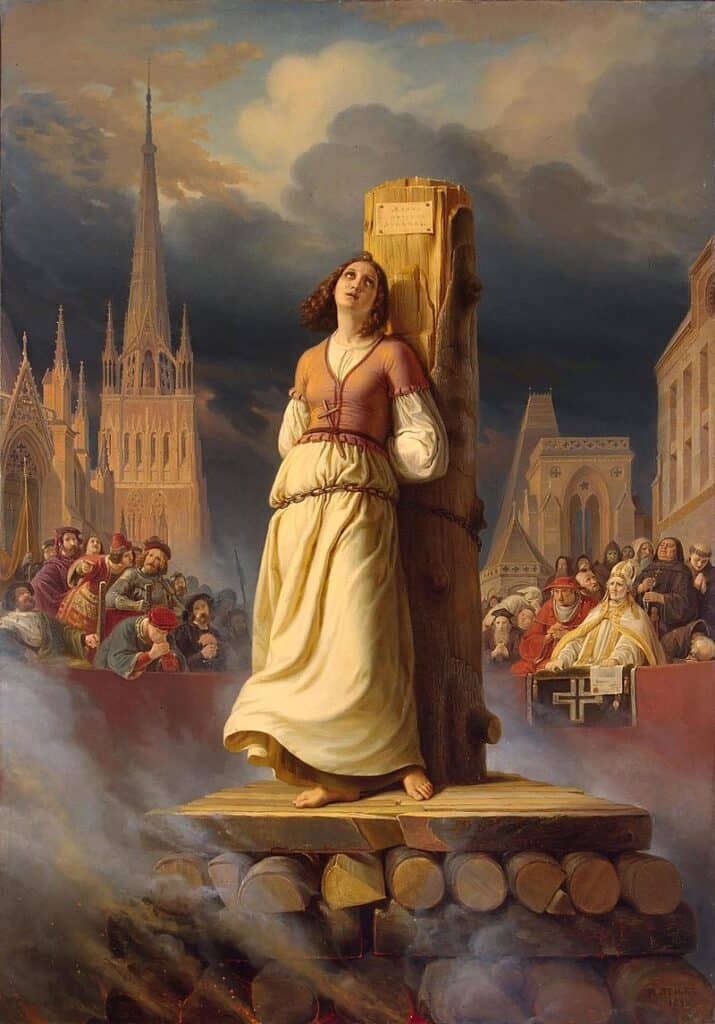 Joan of Arc – the saint

In 1456 her judgment was reviewed by an inquisitorial court. Her innocence was proclaimed and Joan was formally named martyr by the church.

In 1803, Joan of Arc was officially declared a national symbol of France by decision of Emperor Napoleon Bonaparte. She was beatified in 1909 and canonized in 1920 by the Vatican.