The artist’s portrait in the World Art Day

April 15th is the World Art Day all over the world. 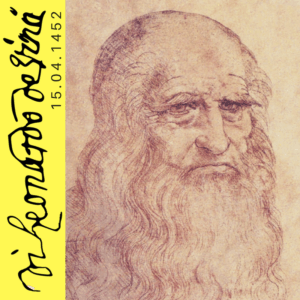 The date was decreed by the World Art Association in 2012, in honor of the birth of one of the greatest geniuses in the history of Western art, and who represents the many faces of being an artist: Leonardo da Vinci.

The artist who believed that “beauty perishes in life but is immortal in art” left humanity a legacy not only of material works, but of a way of behaving in the face of art that is based on curiosity, on learning through experience and in reflection as part of any creative project, and that would inspire thousands of artists over the centuries and around the world.

To celebrate World Art Day, we want to present today  five works in which the central theme is the artist’s profession  – a tribute to all those who, like Leonardo, immortalized the beauty of life and production of the artwork. 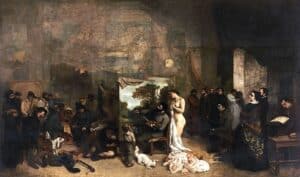 One of the most important works by Gustave Courbet (1821-1880) and French realism, the artist’s studio (or painter’s studio) is a painting full of allegories.

On the left are various types, human figures that belong to the various layers of society. On the right, we have some friends of the painter and people related to the Paris elite. In the center of the image, there is the painter, the artist, creating a landscape canvas, the valley of the river Loue, a reference to the birthplace of Courbet, in Ornans – and beside him a boy and a cat, and the figure of a naked woman, which is a symbol of academic art of the period. Some still see it as a representation of Courbet’s inspirational muse. 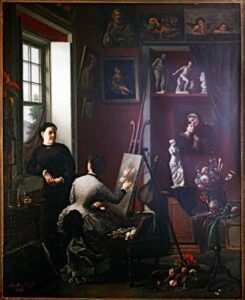 Abigail de Andrade (1864-1888) was the first woman to receive the main prize at the Salão da Academia Imperial de Belas Artes, in Brazil.

In the painting A Corner of My Studio, she represents herself with her back to the viewer and does not draw attention to herself, but to her place of work. In addition to the painter, occupying the center of the canvas is her canvas and easel. There are reproductions of Greek and Roman sculptures on the wall shelves, pre-Raphaelite angels, flowers and reproductions of Renaissance masters. The arrangement of things in the studio suggests a professional artist who is concerned with studying and perfecting her own technique and who uses all kinds of references to do this.

The most interesting thing is that in this work Abigail does not pose as a mere muse. She is just the subject of her painting, a fact that, in the 19th century, was a challenge.

World Art Day – CLAUDE MONET AND HIS WIFE IN HIS FLOATING STUDIO, BY EDOUARD MANET (1874) 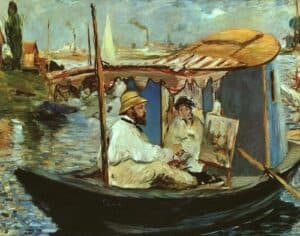 Unlike the two works presented above, in this painting the artist does not represent himself in his craft, but a friend.

The Impressionists, a movement in which Monet was immersed, had the particularity of painting outdoors, in order to capture the different shades of color that light transmitted throughout the day. In this painting, Monet is attentive to his work, a sketch of the margin in front of him. Camille keeps the artist company and appears to be distracted or reserved, while Monet composes the painting. 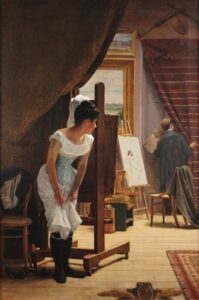 Almeida Júnior’s (1850-1899) paintings are always “storytellers” that unfold within themselves, if we look closely.

In O Importuno, we have a painter, with a cape and work material in his hands, who was interrupted by the importunate person, referred to in the title, who makes him slightly draw back the entrance curtain to the studio.

It is probably this intrusive visit that causes his model, the girl who occupies the foreground of the painting, in a white dress, stockings and dark hair, to hide behind a screen, embarrassed twisting her clothes in her hands. While the painter watches someone we don’t see, the model watches him without his seeing her – and don’t we, somehow, also watch the whole scene, in a circle?

World Art Day – ARTEMISIA GENTILESCHI, SELF PORTRAIT AS AN ALLEGORY OF PAINTING (1638) 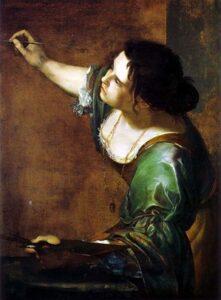 It wasn’t just nineteenth-century artists who took care of portraying their profession. In the 17th century the Italian artist Artemisia Gentileschi (1593-1656) also took up the subject while in England at the invitation of Charles I. With a brush in one hand and a palette in the other, the painting portrays the personification of the artist at the same timein which it stands as an allegory of painting. With dark hair and carelessly tied back, and a brown apron over a green dress, the painter looks intently at the work she is producing.

All these paintings have in common the fact that they show the production of the painting, the work being done, the so-called work in progress. May they inspire us today!