Post by Jéssica Panazzolo. Get to know  the most important cultural events Bauhaus100.

Bauhaus100 | Bauhaus celebrates 100 years with the inauguration of museums

The most famous and important school of art and design in the world celebrates its centenary during 2019 with a series of events during the year.

The opening takes place with a concert of piano of the German jazzista Michael Wollny, January 16, in the Academy Arts of Berlin.

The musician composed on the basis of the multiple references of the Bauhaus, the historical moment and how the School could be understood today.

The event will be broadcast live on this link from 7pm.

Between January 17 and 24, the virtual reality experience “The Total Dance Theater” invites viewers to question who is the man in the midst of the technological age, with a dance performance, retracing reflections of Bauhaus.

Using spectacles of virtual reality, the audience watches the dancers flanking by a choreography realized in three levels, mounted on a virtual construction in the stage, that is inspired by the theatrical experiments of Oskar Schlemmer and Walter Gropius, founders of the celebrated school of art and design . In the same period, a series of exhibitions, views and montages will take place at the Berlin Academy of Arts.

The height of the celebrations will be with the opening of two new museums dedicated to the Bauhaus in the cities that were it was born 100 years ago.

After three years of construction, the Bauhaus Museum Weimar will open its doors on April 6, 2019 and will present the largest and oldest collection of school objects, replacing the Bauhaus Museum of Theaterplatz which has been closed for a year.

The goal of the curators is to connect the legacy of the Bauhaus to the present times. 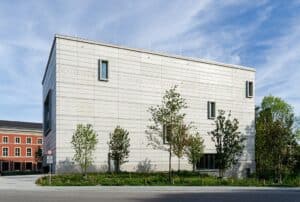 With the inauguration scheduled for April 8, 2019, the Bauhaus Dessau Museum will focus on one of the pillars of the school: the diversity of learning.

“Our collection will show above all the day to day learning,” says the director Claudia Perren.

As we have already mentioned here, the Bauhaus believed that art and crafts should go together, since they start from the same essence, and that multidisciplinarity is that it would form artists capable of producing beyond the beautiful, combining form and function.