Fritz Lang (Vienna, December 5, 1890 – Los Angeles, August 2, 1976) is considered one of the most famous representatives of German expressionism.

The purpose of this post is to know the characteristics of the Expressionist movement and how it manifested itself in the cinema. 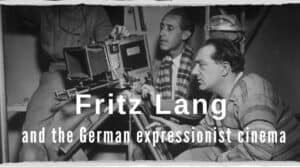 Expressionism is a very broad movement, beginning with painting, but eventually also passing through sculpture,

Expressionism as an artistic movement is born in Germany (territory at the time belonging to the Prussian Empire), fruit of the need to externalize the impact of the modern life of the time and the growing crisis of values. This crisis was based on several factors resulting from the development of urban life:

In fact, Expressionism wants to reflect on the fragility of the human condition, whether by caricature or by the grotesque. In this sense, this artistic chain is seen as an instrument of social and political denunciation.

German Expressionism was one of the first artistic genres to influence cinema, paving the way for successive other vanguard styles and techniques.

Expressionist films were born out of the relative isolation of Germany from the rest of Europe during the 1910s. The appeal for cinema was strong and there was a huge demand.

With the prohibition imposed by the German government on the importation of foreign cinema, the creation of national cinema became primate. The resulting creations soon spread through international territories, and by the early 1920s several European filmmakers began experiments with the aesthetics of the absurd and savage German cinema.

Click the image to link to digital copies of original movies. You can view the movie “The Cabinet of Dr. Caligari” and search for other movies that interest you. The site is in English and the original versions are in German.

In 1927, Lang would make “Metropolis” an equally pioneering and groundbreaking film.

Set in a dystopian future, the metropolis tells the story of two worlds: the upper city, inhabited by the rich ruling class, and the underground city, filled with the impoverished working class, who spends its days working on the huge machines that keep the city running.

There is some disagreement among film historians about if “Metropolis” can truly be considered an expressionist film.

Although the scenery of the great city does not contain such overtly expressionist images as “Dr. Caligari’s Cabinet”, the exaggerated movements of the characters, the tendency toward angularity, the crowded city panorama and the intense contrasts between the superior and the lower city are details that adhere directly to the expressionist tradition.

Similar to the paintings produced by members of the expressionist movement Die Brücke, “Metropolis” represents the city’s environment as marked by chaos, tension and intensity.

“Metropolis” is considered as the last representative film of German Expressionism.