International Women Day – March 8th. Discover its origins in the socialist and suffragist movements of the 19th and 20th century

“gender equality today for a sustainable tomorrow” is the United Nations motto for International Women Day 2022, remembering the contribution of women in the fight against the pandemic and in the fight for the Climate.

International Women Day was established in 1975 by the United Nations (UN), with the aim of remembering women’s struggles for social, political and economic achievements.

But the idea began much earlier, in the late 19th and early 20th centuries, in the United States and Europe.

The first demonstrations for women’s rights originated in the socialist movement, which sought equal economic, social and labor rights, and in the suffragette movement, which fought for equal political rights, namely the right to vote.

The creation of an International Women Day was proposed in 1910 by German socialist leader Clara Zetkin during the Second International Conference of Socialist Women in Copenhagen, but without a specific date set. 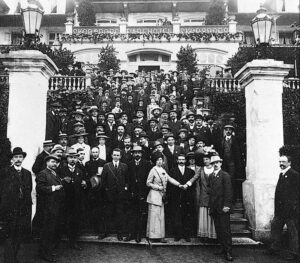 Copenhagen, 1910. Eighth Congress of the Socialist International at the front, Alexandra Kollontai and Clara Zetkin.

the origin of the date – International Women Day

There is no absolute agreement on the origin of the date, March 8 – International Women Day -as there were several manifestations and struggles for women’s rights in the early 19th century.

In 1908 “socialist women on the Lower East Side of New York organized a mass demonstration in support of equal suffrage, the anniversary of which (Women’s Day) would be commemorated”.

The purpose of these demonstrations was the right of women to vote in the United States.

This was not the first tragic fire in factories in the United States and one of the consequences of the tragedy was the strengthening of the International Union of Workers in the Confection of Women’s Clothing, known by the English acronym ILGWU.

From 1909 on, on different days of February and March, demonstrations began to take place in the United States and Europe for the struggle for women’s equality.

Those were directly linked to the suffragette movement and the struggles for labor rights and working conditions.

Women’s demonstrations in Russia and the Revolution

In early 1917, in Russia, there were demonstrations by workers for better living and working conditions and against entry into the 1st world war. 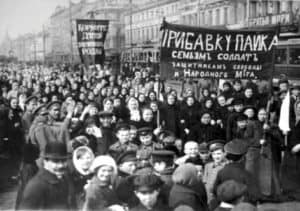 Demonstrations in Russia in 1917

The protests were brutally suppressed. The date of the main demonstration, March 8, 1917, was instituted as International Women Day by the international socialist movement.

The International Women Day and the suffragism

The suffragette movement was a movement that aimed to extend suffrage (the right to vote) to women.

The first country to guarantee women’s suffrage was New Zealand, in 1893, thanks to the movement led by Kate Sheppard.

They participated in the women’s suffrage movement, both women and men, in the struggle for equality in the right to vote.

The origins of the movements for equal voting rights and political participation date back to medieval Europe and above all to the French Revolution.

The suffragette movement in the USA 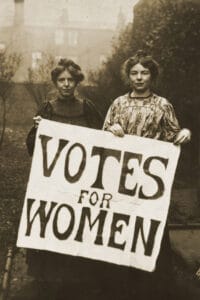 In the US, after the revolution, this movement began to take shape. American women intervened in public life more than they did in Europe.

Between 1691 and 1780 Massachusetts women landowners could vote, and some groups such as the American Quakers and individuals such as Thomas Paine advocated for women’s emancipation.

In the 19th century, American suffragettes worked in abolitionist movements, until it was decided to create an exclusively suffragist movement, in which Lucretia Coffin Mott, Elizabeth Cady Stanton, Wendell Philips and Ralph Waldo Emerson stood out. In 1848 Mott and Stanton prepared the first Convention on the Rights of Women, meeting in Seneca Falls, New York. Feminist leaders in 1869 created the National Woman Suffrage Association, and another suffragist faction formed the American Woman Suffrage Association.

In 1890, Stanton and Anthony merged with the latter faction to found the National American Woman Association. Finally, women’s voting rights were granted in the States of Colorado (1893), Utah and Idaho (1896), Washington (1910).

This American movement culminated in the aproval by the American Congress in 1919 of the Amendment to the Constitution that granted the right to vote regardless of race and sex.