In this article, discover the Winston Churchill paintings – statesman, historian, writer, he was equally passionate for painting, particularly landscapes. 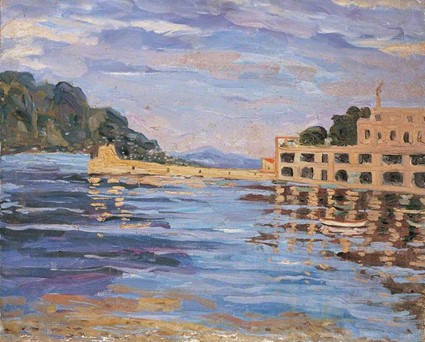 The English statesman Winston Churchill is one of the most respected and admired men in the world. His role as Prime Minister of the United Kingdom, especially during World War II, has made him a well-known figure.

It is, however, less known that Churchill was a keen and skillful painter and landscapes were among his favorite themes.

Perhaps you have read about Sir Winston Churchill since his performance during the two World Wars of the 20th century is known to virtually everyone. Or maybe you have seen him in The Crown series!

He was born on November 30, 1874, into an aristocratic family that was traditionally associated with political and military life. Yet Churchill, this statesman, historian, writer, and officer of the British Army, was also a painter and loved landscapes.

Identified as an Impressionist artist, Churchill took an interest in capturing beautiful landscapes, especially at the beginning and at the end of the day, when sunlight creates the most interesting effects.

However Churchill, who was not a professional painter, did not go to faraway places in search of an environment that inspired him, or where he could have a beautiful sight to paint, as the French Impressionists did. Instead, he chose places in the vicinity of his house.

A View of Chartwell 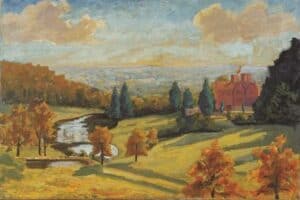 The View of Chartwell, which depicts the place where he lived for almost forty years, is located in Kent, South East England. Sir Winston Churchill bought the estate in 1922 and lived there until shortly before his death in 1965. View of Chartwell is the view from the garden of this residence, where he also dealt with political matters and took care of his political obligations. 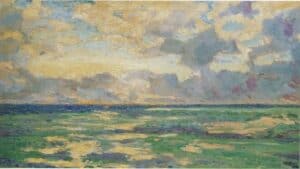 Do not think, however, that Churchill painted only what was familiar to him. His duties made him travel a lot, and during these trips, he was also able to find time for his art. That is why Churchill is considered to be so passionate about painting.

Even if he saw painting solely as a hobby, he devoted himself to it with seriousness. Look at this painting in which he depicts a dawn in Cassis. The different shades of green and blue are so beautiful!

Distant View of the Pyramids 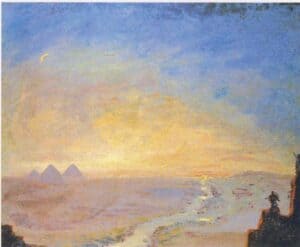 Cairo from the Pyramids with the Artist Painting 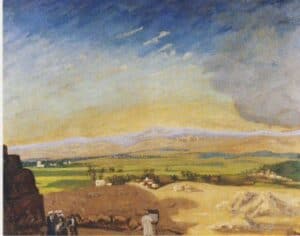 Winston Churchill, due to his involvement in Near East politics, spent some time in that part of the world. The landscapes that he painted back then are among my favorite of his works. In his paintings from Egypt, the golden clouds and the blue sky perfectly match the orange-green shade of the earth.

The shades harmonize so perfectly with the light that it is impossible to remain indifferent to this landscape. One of the paintings shows the famous Egyptian pyramids.

The Atlas Mountains from Marrakech 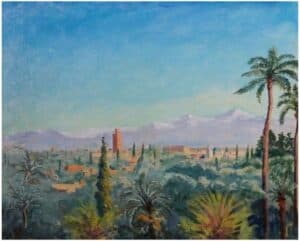 Sir Winston Churchill fascinates people for many different reasons. He acted on many fronts, from literature to politics. (By the way, speaking of literature, he received the Nobel Prize for Literature in 1953.)

Yet in painting, he did not try to change the world or denounce injustice. Churchill wanted only to portray the beauty of natural landscapes, whether it was the garden of his house or the other side of the world.

It is in this simplicity that lies the importance of his art.