Christ in the Storm on the Sea of Galilee is without a doubt one of Rembrandt’s most impressive works. In this article, we’ll look at this painting that unfortunately disappeared in one of the most daring art thefts in history and that was never recovered. 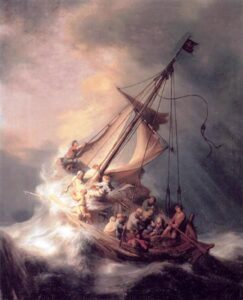 It is difficult not to be enchanted by the technique and ability of this Dutch artist to portray scenes of all kinds. Rembrandt is a great master, and personally he is one of my favorite artists.

The work I present today is simply magnificent. Rembrandt has only amazing paintings  so choosing a single one is difficult, but I thought I would show the one that impresses me the most: Christ in the Storm on the Sea of Galilee is an intensely dramatic painting, full of meaning and special beauty.

But before we move onto the painting itself, a little note about the painter: Rembrandt Harmens van Rijn was born in Leyden, The Netherlands, on July 15, 1606.

He enrolled in painting schools but his learning was consolidated in the atelier of the painter Jacob Isaaksz, who taught him how to draw and how to prepare paints (yes, in the time of Rembrandt, the painters made their own paints).

Still young, in 1627, Rembrandt opened his own studio and due to the quality of his work, commissions began to arrive. After the death of his father and the subsequent move to Amsterdam, things got even better: in about a year he became the most expensive and sought-after painter in the region.

Famous for portraits, Rembrandt registered Dutch society like no one else, becoming one of the greatest Dutch painters in the history of art.

He produced about 300 paintings and 300 engravings in his artistic life.

Despite this success, his life was not so good. His love story is very sad and as they say, not all is sunshine and roses…

Success was accompanied by unaffordable expenses and Rembrandt died at the age of 63, being buried in a pauper’s grave.

Christ in the Storm on the Sea of Galilee 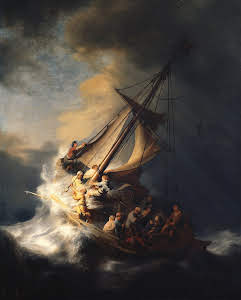 Well, let’s get back to today’s painting: Christ in the Storm on the Sea of Galilee is just one of the many biblical scenes produced by Rembrandt. The painting shows the passage narrated in the Bible in which disciples are terrified in the face of a storm, which Jesus Christ calms down – and then he teaches the disciples the importance of faith. But look at the painting closely: would not you be desperate too?

What Rembrandt portrays is precisely the moment of  fear and terror of the disciples before the force of nature, in contrast with the tranquility of Christ. One of the masters of creating brilliant effects in the play between light and dark, Rembrandt draws our attention to the left side of the painting, from where the great waves come and the disciples flock to save the small boat. In the struggle, nature seems to be winning. 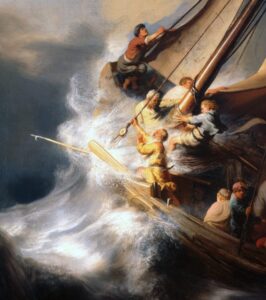 While five of the men stick to the sail of the boat, the others run to Jesus, distinguished from the others by a subtle halo. What it seems, if we did not know the story, is that everyone is going to drown. 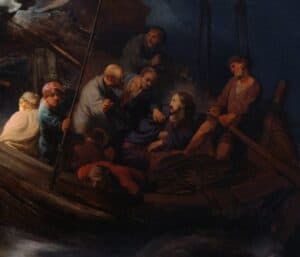 Dated from 1633, the work does not portray only a situation of anguish: it is the anguish itself.

Where is The Storm on the Sea of Galilee

Unfortunately, the turbulent and shocking picture was stolen from the Isabella Stewart Gardner Museum in 1990. The painting had already belonged to several collectors when it was acquired by Isabela in 1898.

Two thieves disguised themselves as policemen and arrived at the museum saying they were going to attend an emergency call. When they entered the premises, they stole the equivalent of five hundred million dollars. In addition to this work, they stole Vermeer‘s paintings.

Then the museum offered a reward to anyone who gave information that would lead to the whereabouts of the artworks. Unfortunately, they are still missing. The museum still has hope, though. In the place where the painting used to hang, its frame remains empty, waiting for its heart to return home.