What was Suprematism? An art movement inspired by nihilistic philosophy

Suprematism , born in Russia between the years of 1915-16, had as main impeller the painter Kazimir Malevich.

Malevich – the mentor of suprematism

Suprematism has a strong influence on Russian philosophy of the late nineteenth century and Malevich is moved, in particular, by Nietzsche’s nihilistic thoughts.
From the ideas gathered here, the Russian painter sought to create a pure and perfect painting in order to express the human spirit without showing any connection with the Real. 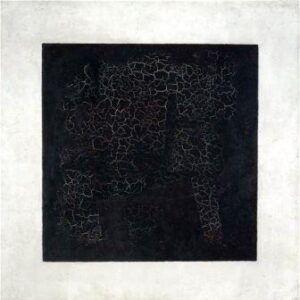 His intense search for pure painting made Malevich even go so far as to call into question the very existence of painting.

This ideology is reflected in the various studies entitled «White on White».

«“We must devote ourselves directly to the masses of color as such and look for the decisive forms in them. The movement of the red, green and blue masses can not be reproduced by the representative drawing. This dynamism is no more than a revolt of the pictorial masses to become independent of the object, to be freed from the forms that designate nothing, that is to say, to make purely pictorial forms predominate over rational forms, to arrive at Suprematism, new realism of painting. “

El Lissitzky, another name for Suprematism, goes so far as to negate the very name “art” and “representation,” as can be seen in his writings of the 1920s. Instead, he speaks only of A. (for art), R (For representation) and A.ists (for artists).

The reason for this approach lays in his believe on the revolution between the old concepts of art and achievement and those that were proposed from then on. 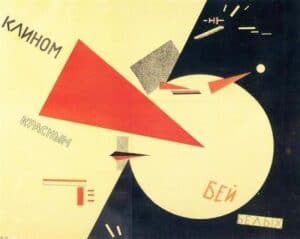 Beat the Whites with the Red Wedge. poster

«We are in the beginnings of an era in which A, on the one hand, degenerates into a game of pasticcio [play of imitation] of the monuments of museums and, on the other hand, fights for the creation of a new expression of space.»

Suprematism is characterized by the use of simple geometric shapes (square, rectangle, triangle and circle) of different dimensions, painted with primary and flat colors and associated with black and white.

Thus, there is the impression that the forms exist in the simplicity of the white and vague background of the canvases, standing out the idea of two-dimensionality and the lack of perspective and depth.

There is a sense of movement and rhythm in the organization of forms in parallel and / or convergent directions (there are situations of convergence that reinforce the dynamism of the compositions).