Want to get to know one of the most relevant Dutch painters? Rembrandt and transcendental humanity.

Rembrandt was one of the most important Dutch painters of the Baroque period.

At the beginning of the 17th century, Holland was throbbing.

In the arts, too, the works of the Dutch painters of this period are well known.

One of the best known Dutch painters will undoubtedly be Rembrandt Harmenszoon van Rijn.

Find out a little more about his works in the article

At the beginning of the 17th century, Holland was throbbing. It was the time of colonial expansion, of the domination of the seas and maritime routes.

In this scenario of prosperity and strength, Rembrandt Harmenszoon van Rijn was born on July 15, 1606, in Leida.

Famous for his portraits, Rembrandt recorded Dutch society like no one else, establishing himself as one of the great Dutch painters in the history of art.

With a strong influence of Caravaggio, the light and shadow of his scenes were fundamental, creating volumes, generating sensations, and giving intensity to intentions.

More than any other of the Dutch painters of the Baroque – and perhaps of any other artistic period, Rembrandt’s works bring into focus the Human.

The expressions, inflections, and feelings contained in a look or the posing of hands.

The works of one of the most relevant dutch painters

The artist gained fame and achieved fortune with his works.

He is believed to have produced about 300 paintings and 300 prints.

Among them are 86 self-portraits made throughout his life.

In addition to commissions to record biblical or everyday scenes, which perpetuated the way of life and the social hierarchy of the Dutch bourgeoisie, especially in Amsterdam, where he settled. 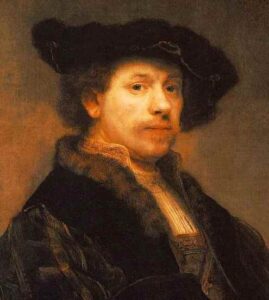 Rembrandt’s self-portrait aged 34, when he was at the height of recognition. 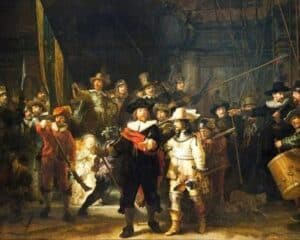 The Night Watch, 1642 – (Commission made to register a group of civil guards.  Rijksmuseum)

The emblematic “The Anatomy Lesson of Dr. Nicolaes Tulp” is a milestone in his career.

Giving voice to science, which was growing at the expense of religion, the painting reinforces the endless modernity that was coming to the Netherlands.

There was progress, which would no longer be restrained by the Church. 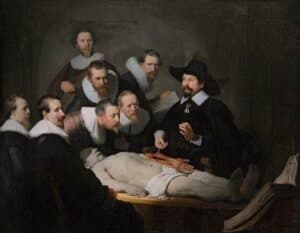 Rembrandt | The life of one of the most relevant Dutch painters

Around the age of forty, the painter bought a large house in Amsterdam.

But just like his paintings, his story was populated by light and dark, from apogee to downfall.

Along with success came exorbitant spending, which drove Rembrandt into debt.

Unable to pay them off, he lost everything and ended up buried in a pauper’s grave, dying at the age of 63.

The huge and well-located house was bought by the Rembrandt Foundation and became a museum in his honor in 1911.

In the Rembrandt House Museum, in addition to paintings and prints, rooms and scenes from the painter’s life, such as his bed and the studio where he worked, are on display.

Rembrandt’s complex universe goes beyond his production, traveling through time and showing us that it is our humanity that unites us in any era. 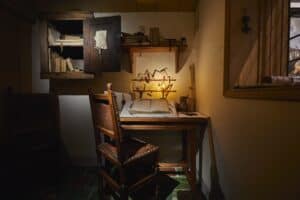