Caravaggio | Why The Death of the Virgin was not accepted by the church?

Caravaggio is considered one of the great representatives of the Baroque movement.

His troubled life crosses with his work loaded with violence, seduction and mystery. Temperamental, Caravaggio became involved in his life in various quarrels, having been arrested, fled from Rome and expelled from Malta.

Main characteristics of his paintings

Caravaggio portrayed ordinary people in his paintings although representing characters and biblical scenes. This brought some problems because the Catholic Church had difficulty accepting its representations of biblical scenes. 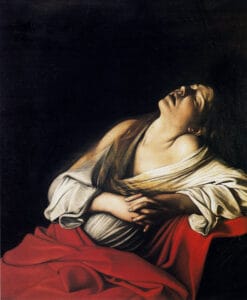 It lent great drama and realism to the scenes through light / dark games and dark backgrounds.

He was a master in the manipulation of light in his paintings giving greater or lesser emphasis to detail or characters by playing between dark areas and light bulbs.

The Death of the Virgin

“The Death of the Virgin,” commissioned for a church in Siena, was refused for opposing the dogma of Mary’s ascension and for portraying her in a red dress.

In this painting, the artist represented “The Death of the Virgin”

The Death of the Virgin is an oil painting done between 1604 and 1606 (or 1602) by the Italian painter Michelangelo Merisi of Caravaggio. The work is preserved in the Louvre Museum in Paris.

In this picture the main characteristics of Caravaggio’s works are present.

Want to learn more about art?