Why are the saint symbols important in the analysis of art?

The analysis of the saint symbols is important in the study of art history as it not only allows us to identify the characters represented but also to frame the ideas and mentality of the times in which the works of art were produced.

Let’s go deeper into this topic with Yolanda Silva, author of the online course Iconography of the Saints. 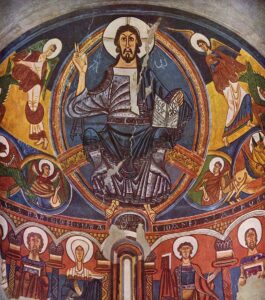 The presence of symbols is common to various societies and religions.

The Christian religion brought forward the idea of materializing divinity, in continuity of the idea of the incarnation of God in the figure of Jesus Christ.

The idea of creating archetypes within the religion became understood as a form of paying homage to a particular religious figure, through its materialization.

This elevates its importance, unlike the previous thought that dictated that we should not veneer an object, such as a religious figure.

The use of icons was very popular in the Christian world.

However, beginning in the 6th century, certain factions rose within the Christian Church condemning the use of the iconographic representations and accusing it of being idolatry.

These factions, called Iconoclasts, publicly destroyed several sacred representations, arguing that only the crucifix is worthy of veneration.

Finally, and after much debate over the issue, at the Council of Nicaea in 787 AD, the use of saint symbols and icons and related representations was approved, as an integral part of the Christian tradition.

Standards in saint symbols and icons

After this period of crisis, standards were created, regarding the different forms of representation and decorative schemes of Eastern Christian churches and saint symbols , standards which are still followed to this day.

In Western Christian churches, however, these standards were only followed until c. 13th century.

Style differences began to arise between East and West.

The Eastern Christian Church would continue the use of icons (bas-reliefs with stylized depictions of religious figures), whereas the Western Church will start giving a little more freedom of expression to the artist, which results in more realistic and humanized features. 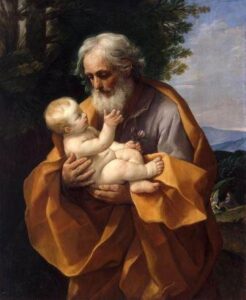 The issue of idolatry / iconoclasm will rise again only with the Counter-Reformation, the Lutherans having been those who fought with greater vehemence against the use of images, even those of Christ.

Catholics, however, maintained and even intensified the use of religious images, employing mostly the Renaissance and Baroque styles.

Especially in Italy and in Spain, the popular Catholic imagery will maintain the influence of the Baroque style. 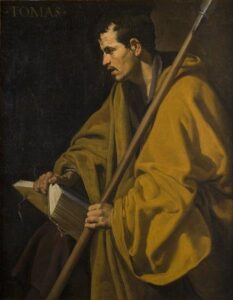 So, by reducing it to a symbol, medieval Christians represented the concepts and ideas that they wanted to pass on and that were most important to retain.

In a certain way, they believed that the image was a way to overcome the material and tangible world and reach the transcendent.

On the other hand, such personalities as Pope Gregory the Great and Thomas Aquinas defended that the images were a simple and effective way to teach the poor and illiterate the precepts of the Christian doctrine.

The use of attributes (associated objects or symbols), as we spoke earlier, came alongside a need to identify the religious characters before a mostly illiterate audience.

In the beginning, we can still find the names of the Saints painted on their halo or on the filacterium (a silk band that usually carries a message and can be across the chest, at the bottom of the figure). 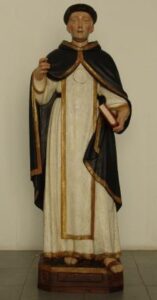 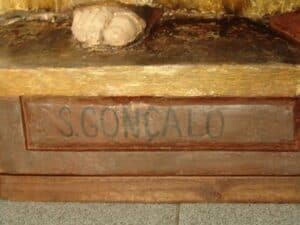 However, the use of signs or symbols, as was tradition in pagan religions, proved much more efficient, having been more accepted over time.

The Saint was this way singled out by his/hers physical aspect, clothing, weaponry, accompanying animals or other symbols related to their life story.

Learn about art analysis and iconography