Get to know who was St Teresa of Avila and how to identify her in art.

In this post learn how to identify the representations of St Teresa of Avila by her attributes.

Saint Teresa was a very  important personality of the history of the Church and she she was recognized as Doctor of the Church.

Who was St Teresa of Avila

Probably the most faithful portrait of St. Teresa. It is a copy of an original painting of her made in 1576, when she was 61 years old. (Source: Wikicommons)

She was a reformer having founded the New Order of the Carmelites – Discalced Carmelites – (embracing the primitive rule of the carmel order).

She founded about 15 convents in Spain.

With St John of the Cross she founded monasteries of barefooted Carmelite brothers. She wrote several mystical texts.

Identification of characters and episodes in works of art

In the context of Art History , the careful description and interpretation of artistic objects allows us to see something more than what is immediately presented.

The use of attributes (associated objects or symbols) came alongside a need to identify the religious characters before a mostly illiterate audience.

In the beginning, we can still find the names of the Saints painted on their halo or on the filacterium (a silk band that usually carries a message and can be across the chest, at the bottom of the figure).

However, the use of signs or symbols, as was tradition in pagan religions, proved much more efficient, having been more accepted over time.

The Saint was this way singled out by his/hers physical aspect, clothing, weaponry, accompanying animals or other symbols related to their life story. 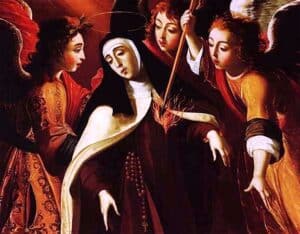 We can distinguish a Saint by two aspects:

– their characteristics – referring to physical appearance and clothing;

– their attributes – the elements of various kinds that generally relate to their condition, occupation, life history or martyrdom.

Representations and attributes of St Teresa of Avila

She is often represented in art. The most representative art work “The Ecstasy of Santa Teresa” by Bernini (Chiesa Santa Maria della Vittoria, Roma). 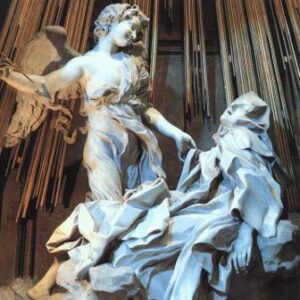 She belonged to the Carmelite Order at the Monastery of Encarnación, in Ávila (Spain).

She founded her first convent in 1562, determined to reform the Order. Championing equality and poverty, she also authored several works in which she speaks of her many mystical experiences.

She is considered a doctor of the Church.

In her biographical book, she describes the vision of an angel that stuck golden arrows through the heart, leaving her «kindled with the love of God».

Writing or in contemplation.

References and other meanings

May appear with other Carmelite and mystic Spanish Saint: St.  John of the Cross.

At the end of the online course Iconography of the Saints, the participants will be able to apply methods of iconographic analysis and recognise symbols and attributes of the Saints, through practical exercises and other resources for future use.

Students will be able to before a practical case, apply the iconographic method in all its levels of reading.

Recognise and contextualise characters and episodes of Christian hagiography.