3 levels of understanding art | Iconography as an area of study

By Yolanda Silva, author of the online courses Analysing Art and Iconography of the Saints.

Symbols and icons in art

The use of icons in art dates back to 3000 BC to the Neolithic civilizations of the Middle East that used animalist figures to represent their gods. We can see, for example, the Egyptian goddess Hathor, represented in reliefs and murals as a woman with a cow’s head. Likewise, the Sun-god Ra is represented with the head of a Hawk and Ptah, the god of creation, with the head of a bull. 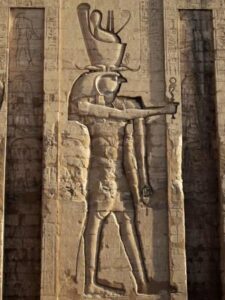 For their part, the classical civilisations associated their gods to specific objects. In ancient Greece, for example, we can identify, Zeus accompanied by an eagle or holding beams of lightning, Apollo holding a lyre and Diana, the huntress, carrying a bow and quiver (or arrows).

The Roman civilization will refine this allegorical use of symbols, relating, for example, a woman surrounded by bunches of grapes and wheat, to the Abundance of the Earth and a good harvest.

Also, during the period of the Roman Empire, the emergence of the symbols of Christianity, as the fish or the dove, that identified respectively Christ and the Holy Spirit, allowed the crypto-Christians to identify themselves in a less conspicuous way, helping them escape martyrdom.

However, in later Christian art, there is an expansion of the amount and variety of iconographic representations. And so we see emerge most of the attributes of Saints and Martyrs, becoming themselves now associated with specific objects (which would serve to identify them).

Allegorical painting became more popular during the Renaissance period and throughout the 18th century. The artists imagined complex compositions full of symbolism, representing, for instance, the theme of human vanity, very popular during the Baroque era. Jewellery, coins or musical instruments would be associated to worldly pleasures, while skulls, unlit candles or hourglasses would remember the viewer that death is imminent (Memento Mori). 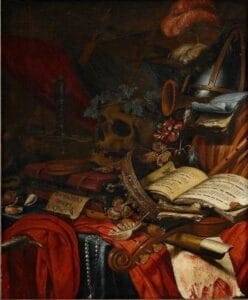 Iconography as an area of study

Iconography as an area of study emerges with the studies of art historian Aby Warburg (1866-1929), still in the 19th century. He advocated that the story of the images is what teaches us their general function, thus being a

mechanism of expression of the needs and expectations and a form of religious and political communication.

o further expand the idea of the importance of the study of the works of art in all their details, he founded the Warburg Institute, in Hamburg (Germany).

However, it’s only with Erwin Panofsky (1892-1968) that Iconography truly becomes a study area.

Having been a student of Warburg in the University of Hamburg, Panofsky developed his own studies, having in mind the definition of Iconology.

In 1939, in his essay Studies in Iconology, Panofsky, as Warburg did before, spoke of reading the elements of a work of art beyond the simple formal description of said piece. In other words, he suggested that, before a work of art, we should not simply ask «what?», but also «why?».

His analysis of the Marriage of the Arnolfini, by Jan Van Eyck, study dated of 1935, will be the first study to deal with the subject of symbolism and iconography within works of art.

For him, what might seem like a confusing and disorganized picture, conveyed, in reality, a very clear message: it was the representation of a marriage contract.

Symbolized by the presence of different elements whose hidden symbology pointed to the sacrament of marriage (like the dog, the sandals, the marriage bed, the mirror.

The very own signature of the painter, which states that «… was here», as if the painter had witnessed an event of importance) and the meaning that these elements could assume in the context in which the masterpiece was produced. 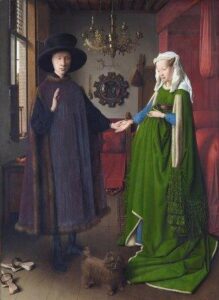 Marriage of the Arnolfini, by Jan Van Eyck

Panofsky, then, details his idea of an analysis through three levels of understanding

In this sense, we can say that Panofsky defends the need to know the specific customs and daily habits of the time, the place and even of those present in the production, to «improve» the possible reading of any work.

Because there is a reason why the author included that symbol, it’s important to do a contextualized analysis.

Get to know our online courses