Abbot Suger – The origin of Gothic, one of the most recognized styles in the history

By Alexandra Kiely, author of the online course Gothic Architecture

The origins of Gothic architecture can be traced back to a 12th century French clergyman named Abbot Suger (1081-1155), who was abbot of Saint Denis and friend and advisor to King Louis VII of France.

Saint Denis was a wealthy and important monastery just outside of Paris. It was supported by the kings of France and held the relics of Saint Denis, the patron saint of Paris.

Around the year 1140, Abbot Suger decided that the church at Saint Denis wasn’t big and impressive enough for a significant monastery with royal connections.

He wanted something more spectacular, and what he came up with  created a new architectural style that would eventually spread throughout Europe. 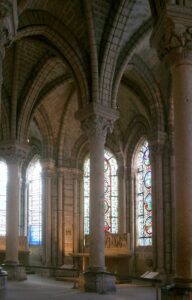 Suger wrote extensively about his work on Saint Denis:

“moved by divine inspiration and encouraged by the council of wise men as well as the prayers of many monks, in order to avoid the displeasure of the holy martyrs I undertook to enlarge and amplify the noble monastic church consecrated by the divine hand”

Abbot Suger, Book of Suger Abbot of Saint Denis On What Was Done During His Administration.

” Suger was born in 1081 of a very minor knightly family He was dedicated to the abbey of St. Denis at the age of nine or ten and came to see himself as its adopted child. Appointed abbot in 1122, he held that position until his death in 1155.

His office was a highly prestigious one. The abbey had been founded in the seventh century by the Frankish king Dagobert in honor of Denis, the patron saint of France, and his legendary companions Rusticus and Eleutherius. By Suger’s time it had long been the royal abbey of France. Kings were educated and buried there.

In Suger’s time, the French monarchy was slowly but surely on the way up. The king was gradually gaining power over his unruly nobles and would eventually use that power to win a major role in European affairs. Most of that development was still in the future, but by 1137 the pendulum was already beginning to swing. As royal abbey, St. Denis was a symbol of royal power, and what was done to it redounded to the glory of both the monarch and Franca Thus its renovation was a political as well as an architectural and religious event.

Suger was in a position to recognize this fact. His status as abbot made him one of the most powerful men in France. He was actively engaged in French political life and virtually ran the kingdom while King Louis VI was away on crusade. A fervent patriot, Suger never hesitated to identify the best interests of king, France, Church, abbey and God.

The old abbey church of St. Denis had been completed in 775. By 1137 it was dilapidated and probably would have been viewed with extreme suspicion by a modern building inspector. Thus Suger decided improvement was in order and in that year he began work on the west end of the church, building a new facade with two towers and three doors. In 1140 he moved from the west end clear to the other end of the church and started to build a new choir. It was completed in 1144. The result was a major event in the history of architecture. Gothic was born.” 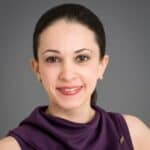 She created, runs, and writes her own website, A Scholarly Skater, where she teaches readers about art history and shares her art-related experiences. She is a regular writer for DailyArt Magazine and DailyArt App.

Alexandra is also a competitive figure skater and ballroom dancer. Visit her at ascholarlyskater.com.