Antoni Gaudí – the innovative architect, born in 1852, who changed the face of Barcelona

In this article meet Antoni Gaudí , one of the most admirable architects in history and who changed the face of the City of Barcelona.

It contains a presentation of the most important works by Gaudí. 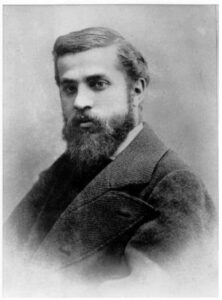 Who was Antoni Gaudí

Antoni Gaudí was born in 1852 in Reus, Catalonia, but it was in Barcelona that he studied architecture, lived and worked, which explains the presence of most of his work in that city.

There, he quickly distinguished himself from other architects due to his talent, inexhaustible creativity and innovative character combined with tradition.

He caught the attention of the Catalan bourgeoisie, getting his best clients. Among them the businessman Eusebi Güell i Bacigalupi, a wealthy textile merchant. 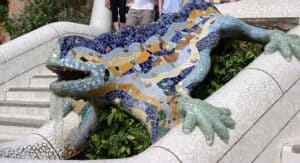 However, the beginning of his career, contrary to what one might think, was not promising when the Catalan architect graduated from university with the lowest grade, a simple “passed”.

The director Elies Rogent questioned “I don’t know if we approve a madman or a genius.”

Antoni Gaudí was the creator of an opulent aesthetic of his own that he developed.

Based on the technique of trencadís (composition of fragmented ceramic elements).

He applied this to the busy façades of his buildings that attributed an original, textured, colourful appearance to which the observer could make countless associations, typical of Spanish Modernism. 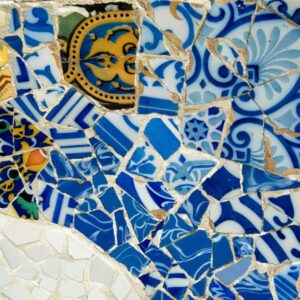 The combination of these elements with his inspiration in nature (sinuous lines), the Gothic and Moorish details, the use of traditional and recycled materials, challenging balance and harmony, made Gaudí an innovative and eccentric architect.

He understood architecture as a total and sculptural art, devoting all his attention to even the smallest details.

He became a genius of architecture that embellished Barcelon

As he was asked to, gave it a new style that reflected and emphasised Catalan identity, distinguishing and autonomising itself politically and regionally from Madrid.

In the presentation, discover some of the most emblematic works of Gaudí

The Sagrada Familia Basilica by Gaudí 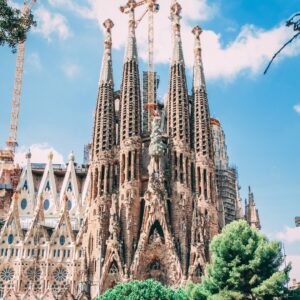 In the online course The History of Art through Curiosities and Unusual Facts, you will also get to know the Basilica of the Sagrada Familia.

Although still unfinished, this monument constitutes an extraordinary legacy for the City of Barcelona and for the history of architecture.

Learning objectives of this online course

To introduce the history of art from the Ancient Age to the Contemporary Age from aspects that are normally unknown.

To provide avenues of research and study for those interested in subjects related to art history.

To give ideas to teachers, cultural tourism technicians, cultural agents or other professionals about ways of teaching and communicating the history of art through curiosities.

To provide a dynamic and engaging learning experience for those interested in art history.

Also available in – Português and Español

Who should take this online course ?