Pisa Tower – the long history of a fantastic construction

The Pisa Tower was started 100 years after the cathedral.

In a golden age, and after the naval victory in 1063 of the Pisans, on the defeated Saracens in Palermo, the inhabitants of Pisa constructed a monumental Romanesque architectural complex.

The complex surprises every visitor with an unexpected view of four monuments.

The cathedral, the baptistery, the leaning tower and the cemetery. were begun between the eleventh and thirteenth centuries.

The pendant steeple or tower has a circular plan as used earlier in the baptistery. Arcades such as the main facade of the cathedral and white marble with black bands link the buildings of the complex of Pisa.

Although it was the third to be built is the most famous element due to its easily detected slope, which gives it a rather disturbing sense of insecurity due to its architectural anomaly. 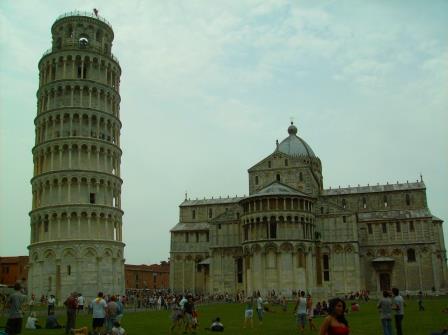 View on the bell tower and the apse of the cathedral

The circular tower consists of eight logs separated by cornices, with six arcades with Corinthian capitals topped by the bells’ compartment, more recessed in relation to its set and with the flag of Pisa at the top.

Despite its seemingly simple structure, the construction of the Pisa Tower took two centuries to complete due to the pauses provided by the various conflicts to which Pisa was submitted.

After laying the first stone in 1173, work continued uninterrupted for five years until the first three floors were completed. Than the gradual slope was detected. The causes are the bad foundations in a weak and unstable ground, where water passes to about 17 meters of depth.

Already with a slope of 90 cm, the Pisa Tower continued to be erected about 102 years later by the direction of Giovanni di Simone, who strictly respected the plan of his predecessor. He demonstrated extraordinary skill to avoid further slope by increasing the height of the columns on the sloping side of the next three floors in order to correct the angle.

According to Vasari when the seventh cornice was reached, the works were again stopped. It was necessary to wait for the year 1350 to give meaning to the purpose of the construction and to construct the cylindrical structure destined to the bells under the direction of the architect Tommaso di Andrea Pisano until 1372.

It was in this last phase that they tried to correct once again the slope, focusing the heaviest part on the higher side that already hung 143 cm. There were placed seven bells, one for each musical note, in total 10,469 kg.

According to legend, Galileo, born in 1564 in the city of Pisa, used the tower for one of his experiments, dropping objects from its top to demonstrate that the speed of acceleration is always the same regardless of weight.

The theory was proven but we do not know if it was here!