Know who St James the Greater was and how to identify him.

In this article learn how to identify the representation of St James the Greater by his attributes. Know the meaning of hisrepresentations.

Who was St James the Greater

According to the New Testament, James was the son of Zebedee and Salome, and brother of the apostle St. John the Evangelist. He would be one of the most intimate apostles of Jesus.

He would have been the first of the apostles to die being beheaded by Herod Agrippa around the year 44.

The representations of St James the Greater are associated to

One of the original Apostles of Jesus, Herod Agrippa ordered he be beheaded and his remains taken to Galicia. His carriage was driven by wild oxen, made gentler by making the sign of the cross.  (Some accounts refer that he was taken by sea.)

According to the legend, the place where he was buried was forgotten until it was lit by a star in 813 AD. It was then called Campus Stellae (Compostela), becoming an important destination of pilgrimage, ever since. Camiños de Santiago.

The Battle of Clavijo is one of the most famous battles of the Reconquest of the Iberian Peninsula, was fought near of Clavijo, La Rioja (Spain) in 844.

According to legend King Ramiro had a vision of St James the Greater, and the next day, the Christians defeated a much larger army with the intervention of St James mounted on a white horse.

Representations and attributes of St James the Greater

The representations and attributes of St James in art are thus related above all to the two aspects mentioned above. Santiago de Compostela as one of the most important places of pilgrimage until our days and the legend of St James Matamoros.

As an Apostle or as a Pilgrim (with all the attributes of a pilgrim); 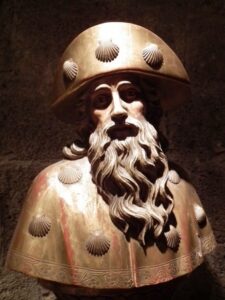 The scene of his beheading;

The transfer of his remains;

As a soldier on a white horse: «Santiago Matamoros» (referring to the battle of Clavijo).