Temple of Amun – Karnak: religious center of the empire

The Temple of Amun – Three kilometres north of Luxor, the Karnak complex, located on the east bank of the Nile, was the largest in the Kingdom, occupying an area of 100 hectares of land and having with 80’000 people at the service of the Kingdom in the era of Ramesses III (also written Ramses III).

Cover image: Grand Access Avenue lined with sphinxes with the body of a lion and the head of a ram, the sacred animal of Amun. 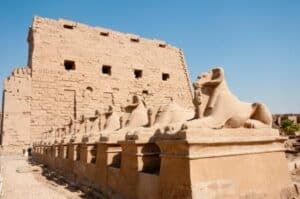 Ram headed sphinxes at the entrance to the Temple of Amun complex of Karnak, Luxor, Egypt.

During the period of the New Kingdom, the ancient city of Thebes was the capital of the Egyptian Kingdom for 1500

years and the most important religious centre was located in Karnak.

Three kilometres north of Luxor, its complex, located on the east bank of the Nile, was the largest in the Kingdom, occupying an area of 100 hectares of land and having with 80’000 people at the service of the Kingdom in the era of Ramesses III (also written Ramses III).

Little remains of the ancient city of Thebes, but the temples of Luxor and Karnak are an exception. The latter is the most famous and visited following the pyramids of Giza.

The Temple of Amun is an open-air museum marvels visitors from all over the world, with its colossal architecture, its pylons, patios, rooms, statues, obelisks and reliefs. 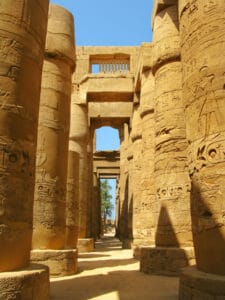 Hypostyle Hall at the Temple of Amun, which once had 134 papyrus-shaped columns 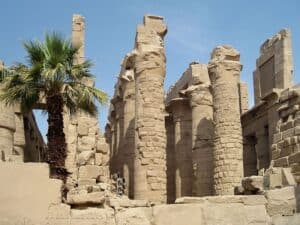 Religious centre of the Empire

The complex of Karnak has long been the main religious centre of Egypt. However, when the Pharaoh Akhenaten came to power and abandoned the cult of Amun, replacing it with the Sun god Aton, a new capital and new temples were built, setting aside the previous, at least until his death.

After his passing, the veneration to Aton faded and Karnak returned to its former role as religious centre of the Empire.

However, the seriously weakened foundations eventually collapsed on the 3rd of October, in 1899, turning the large and famous compound into ruins of stone with broken columns, fallen architraves, destroyed statues and faded gardens.

It took several decades before the reconstruction began, in such an important space for the country, contribution of the various monarchs who progressively expanded the sanctuary.

The Temple of Amun is still today an almost magical attraction for visitors who are fascinated by the Egyptian civilization.

Egypt Pyramids | The architecture of the Pharaohs

In the online course Treasures of Architecture, get to know:

Module 1 -The Great Pyramid of Giza

1.1 The architecture of the Pharaohs

1.1.1 The importance of River Nile

1.1.2 Evolution of the funerary construction

Module 2 -The Temple of Amun

2.1.3 Religious centre of the Empire

4.1 The architecture of the Great Roman Empire

5.1.1 The division of the Roman Empire

Learn more about history of art and architecture