we present summaries of some of the most important artistic movements.

Dadaism emerged in Switzerland during the First World War.

During this period, Switzerland remained neutral, hosting many intellectuals, who sought refuge there from the horrors of war.

The creative force is dense and, as a result of the conflict environment, is characterized by revolt and nihilism.

The Cabaret Voltaire in Zurich was the meeting place of the artists who created Dadaism.

Some of these artists: Tristan Tzara, Hugo Ball e Hans Harp. The group intended to be more a reaction to bourgeois society than an artistic style per se.

Instead of the avant-garde movements whose designation somehow explained its creative essence, Dada does not try to create a style and does not (in any way) want to satisfy the public.

Dadaism assigns unlimited power to the artist, who can make of whatever material, object or amalgam of whatsoever, his work of art – all in the quest for public reaction.

The Dadaist Manifesto of 1916 determines the guide lines of the movement:

The processes of deconstruction and destruction of the image were used for the purpose of recreation.

The artist Dada was invited to use his imagination at the most extreme and absurd level, giving force to a source of inexhaustible imagination, perfectly spontaneous, primitive and even unconscious and irrational. 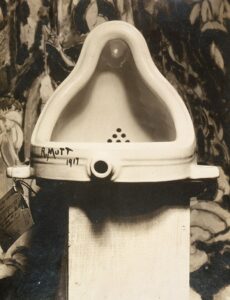