Les Demoiselles d’Avignon, by Pablo Picasso, is one of the best-known paintings by this Spanish painter and one of the most famous in the world. 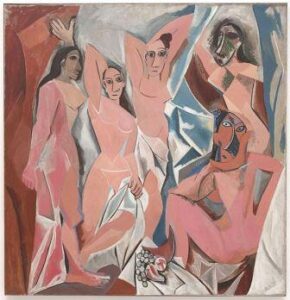 Five women in a distorted space: this is certainly one of the portraits most associated with the painter Pablo Picasso and Cubism.

In 1907, Picasso presented to some close friends, and also artists, the painting Les Demoiselles d’Avignon.

With that, he shocked his colleagues, who considered the work “a crazy and monstrous thing” and at the same time, “a revolution.”

Les Demoiselles d’Avignon took more than a year to complete, and in all that time Picasso didn’t let anyone see his work.

The painting, which is more than two meters high, depicts five women, prostitutes in a brothel in Barcelona. Picasso presents distorted images in an equally distorted environment.

The two women in the center, with their arms up, look defiantly straight ahead, staring at the viewer. 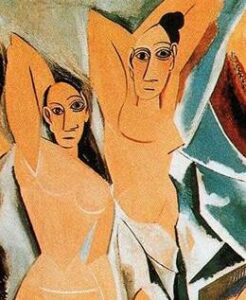 Although they are looking straight ahead, notice that their noses are in profile. Both form a kind of contrast to the other three figures, as their faces are softer, and in some ways, more realistic.

The other figures in Les Demoiselles d’Avignon have faces like masks, and it was from masks that Picasso got his inspiration.

In the same year that he completed the painting, he saw African masks for the first time, masks used in sacred rituals, which expressed life and death, in which human features were represented in a symbolic way.

At the time when Cubism emerged, France was colonizing Africa, so the media at the time was full of stories and objects considered “exotic”.

To create the masks on his figures, Picasso relied on ceremonial masks from the Dogon, an ethnic group in Mali, known for their masked dances and sculptures. 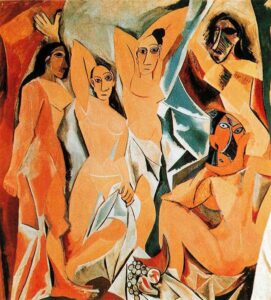 Among the masked figures we find in Les Demoiselles d’Avignon, it is the crouching girl who has the most Cubist aspect of the group, so to speak.

Note that although her face is facing the viewer, she is sitting with her back.

This anatomical change that makes various parts of the body seen, in a non-naturalistic way, is a very striking feature of Cubism. 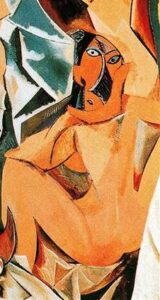 The two women, standing at the ends, pull a curtain, and the one on the left seems to become a fabric herself.

Finally, notice the fruits at the bottom of the frame, which protrude similarly to women.

These fruits were part of the earlier version of this work, which included two men (a sailor and a student), but which Picasso chose to withdraw.

Les Demoiselles d’Avignon is considered one of Picasso’s most radical works, because although the subject was common – a group of naked women – the treatment given to the figures was exceptional at the time.

In addition to the masks, which had a strong effect on the final version of the painting, Picasso also drew inspiration from the works of Paul Cézanne.

About the masks, Picasso stated:

About Cézanne, Picasso said: “He was my only master”.

In fact, in Les Demoiselles d’Avignon the influence of Cézanne is notable, especially when compared to the work Les Bathers, from 1875. 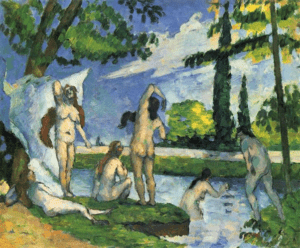 We can see that Cézanne’s work inspired Picasso’s composition, especially the poses of the figures and the angular shape.

The opinions about Picasso’s painting, which alternated between “monstrosity” and “revolution”, caused the artist to put it aside for several years.

The path of the artist until the cubism was long and full of trials. Like the Blue and Rose periods.

But, in fact, this painting is considered, in art history, the landmark of Cubist art.