Sunflowers by Van Gogh – why are the world’s most expensive flowers?

Sunflowers by Van Gogh are among the artist’s best-known paintings, and they are also among the most expensive works of art in the world.

The question is, why do Sunflowers by Van Gogh cost so much money anyway?

When we talk about Sunflowers by Van Gogh we are actually talking about a series of paintings produced by the artist, not just one.

These sunflowers are still lifes, a genre of painting in which objects, inanimate beings, etc. are depicted.

In his short career, Van Gogh produced several paintings in the genre of still life, and the best known are his sunflowers. 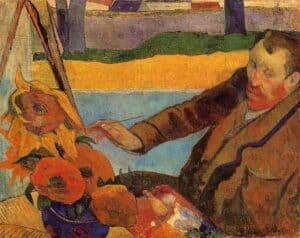 Who was Vincent van Gogh

Vincent van Gogh was born on March 30, 1853, in Groo Zundert, in the Netherlands.

The oldest son of a family with six children, his first job, in 1869, was as an assistant to his uncle, an art dealer. Later he worked as a teacher, missionary, and clerk.

It is in 1880, at the age of 27, that Vincent begins his career as a painter. Six years later, he goes to France, where he comes into contact with the art of Rubens and Japanese art through prints.

The mental collapses he suffered are accentuated from 1888, in Arles, and the painter voluntarily decides to intern himself, however, he did not stop producing. The famous painting Starry Night is from this period.

Finally, on July 27, 1890, at the age of 37, Vincent died. Supposedly, the cause would have been suicide, but some reviews have put this theory in doubt, and Vincent may have been the victim of an accidental shooting.

Vincent van Gogh is basically a Midas of the art world. Not only his paintings are among the most expensive in the world, but also it is possible to sell almost anything that contains a reproduction of his work, from socks to notebooks.

However, during his lifetime, the Dutch painter sold only one painting, The Red Vineyard. So what has changed? 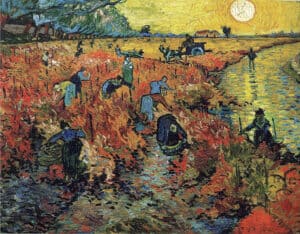 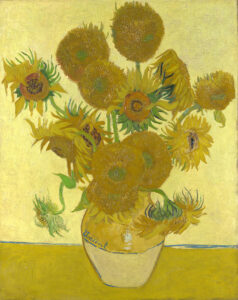 It was around 1888 that the painter devoted himself to sunflowers. Twelve, thirteen, fourteen, fifteen, in effect, various flowers in jars, in different yellow gold paintings.

In a letter from him to his brother Téo, Van Gogh wrote:

Sunflowers by van Gogh in the art market

This raises the question of what criteria are established to price a work of art.

The popularity of the artist? His or her life story? These are two points that somehow do matter, but they are not the only ones.

When we talk about the art market, we are referring to two markets:

The first, called the primary market, can be understood as the transactions carried out through galleries that represent artists.

The secondary market, in turn, is that of auctions. And for each type of market, there are different criteria and ways of pricing.

The primary market takes into account, for example, the dimensions of the work and the technique. In this market, more is paid when there are already works by that artist in the market, at a high price.

The secondary market takes into account, among other things, the popularity of the artist, his awards, his participation in important exhibitions. It also considers whether the artist is alive or dead; after all, a dead artist is an “unproductive” artist, whose works are scarce.

In the case of Sunflowers by van Gogh , or any other of his paintings, it is actually the secondary market – that of the auction houses – that is pricing the works, taking into account criteria such as those I mentioned above.

And this also contributes to raise the value of his work.

His personality, the collapses he suffered, the extent of his production, his relationship with his family, all these factors contribute to his works becoming objects of desire, especially in a consumer society where even the arts are used to stimulate this consumption.

Is an expensive artist a dead artist?

It may seem, from what has been written so far, that artists only become expensive or recognized when they die. This is not quite true, and there are many examples in the history of art to prove it.

This being the case, why did Vincent sold only one painting during his entire life? Why weren’t sunflowers by van Gogh sold before his death?

Van Gogh lived at the end of the 19th century, when many European countries were going through an aesthetic rupture. The impressionists, for example, broke the rules established by the Academy, and their art was not well regarded by critics and the public.

Had he lived longer, it is very likely that van Gogh would have seen his paintings for sale. Monet’s dealer, for example, had to wait about ten years to get a return on his investment.

Vincent van Gogh‘s paintings, his sunflowers, fields, self-portraits, in short, his production, are a legacy not only of a man, but of an era.

They are valuable, beyond the financial sense, in an aesthetic sense, for revealing a significant part of Art History.

What will you learn in the art market online course

In this certified online course you will learn how the art market works through: