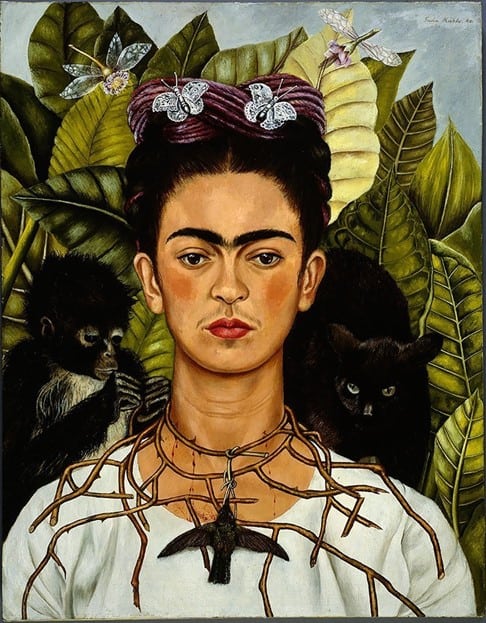 In Self–Portrait with Thorn Necklace and Hummingbird Frida shows herself to be at once someone who has suffered much, but who is profoundly powerful.

Frida Kahlo was born in Mexico on July 6, 1907, and is considered an artist of enormous importance, whose personal story is as fascinating as her work.

In this article we will analyze her Self–Portrait with Thorn Necklace and Hummingbird , 1940.

Self-Portrait with Thorn Necklace and Hummingbird 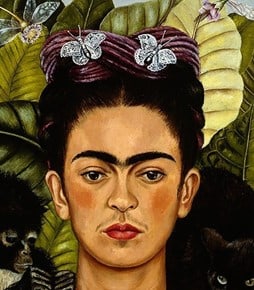 The focal point of the painting is Frida’s face, depicted as the artist had done so many times before, with the striking eyebrows and the characteristic frown.

The hair, also as in other works, is tied up in a traditional Mexican hairstyle, but what is most striking about the depiction of Frida’s face is her gaze, which remains hard and firm.

This firmness in her gaze can be seen as a metaphor for her suffering – it is worth remembering that Frida’s life is extremely linked to her work.

In 1939, a year before creating this self-portrait, Frida had separated from Diego Rivera, with whom she had an extremely troubled marriage. 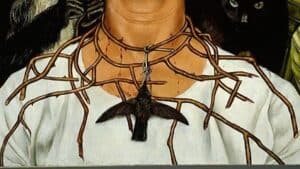 As the title of the work states, Frida wears a necklace of thorns, on which there is a hummingbird hanging.

The necklace of thorns refers to the Christian image of the crown of thorns, which was placed on Jesus Christ. According to Stephen Farthing:

“Frida draws on pre-Columbian and Christian imagery to portray herself, combining a Christ-like figure with that of an Aztec goddess.”.

The animals in Self-Portrait with Thorn Necklace and Hummingbird

Frida is flanked by two animals: on the right, we see a black cat and on the left, a monkey.

Both are on his shoulders, and while the cat watches the hummingbird, the monkey is busy with the necklace of thorns.

Although the black cat is traditionally linked to bad luck and the monkey is a symbol of lust, it must be considered that during her life, Frida took care of several animals, and that they often appear in her work. 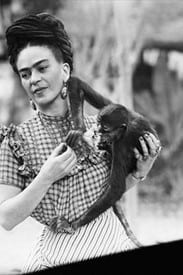 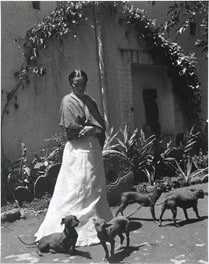 Frida’s work – fruit of her own reality

Frida’s paintings are generally associated with Surrealism, however, the artist disagreed with this framework.

According to her, her art was the result of her own reality and not of her dreams.

In fact, Frida suffered a lot in her life, both physically and emotionally, and it is these pains that she represents in her work.

You can get to know Frida better in the article Frida Kahlo – an artist of truth.

At the age of 6, Frida contracted polio, which caused her to have a permanent problem with her left leg.

When she was only 18 years old, she was involved in a serious bus accident, leaving serious injuries and sequelae in her spine, uterus, ribs, and other parts of her body.

Emotionally, she didn’t have a very peaceful life either: she had a troubled relationship with fellow painter Diego Rivera, from whom she divorced and then remarried.

She also had a few miscarriages, and all this was portrayed in her painting.

Her gaze, which is held before the observer in a firm and concise manner, is proof of this.

Nothing different from the reality of this brilliant artist.

Want to learn more about art analysis and art history?