Today visit the Louvre Museum on another guided tour by Emília Mori.

And now, let’s visit the Louvre Museum in France!

The Louvre Museum, in addition to being considered the largest art museum in the world, it is also classified as a historical monument, as it houses approximately 38 thousand objects – from Prehistory to the 21st Century – exposed in an area of 72 thousand and 735 square meters.

It is one of the most visited tourist spots in the world. In 2017 alone, it received 8 million and 100 thousand visitors. 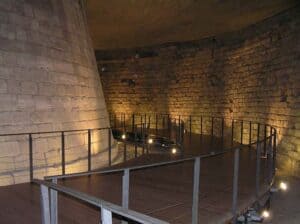 The location of the Louvre is privileged, it is on the right bank of the River Seine, central landmark of Paris (France) and is also located in the Louvre Palace, where it was originally built to be a fortress. It was built between the 12th and 13th centuries, during the reign of Philip II.

In the basement of the Museum it is possible to see the remains of the fortress.

Due to the urban development of the city, the fortress was eventually converted in 1546, by Francisco I, into the main residence of the French Kings.

It was enlarged several times, forming the current Louvre Palace. Louis XIV, in 1682, preferred to establish his residence at the Palace of Versailles, leaving the Louvre to keep the royal collection, including the collection of ancient Greek and Roman sculptures.

In 1692 the Louvre housed the Académie des Inscriptions et Belles-Lettres (remained for 100 years) and the Royal Academy of Painting and Sculpture.

During the period of the French Revolution, the French National Constituent Assembly decreed that the Louvre was intended as a museum and began to exhibit exhibitions of the country’s masterpieces.

The Louvre museum was opened on August 10, 1793, there was an exhibition with 537 paintings, most of which were works belonging to royalty or confiscated properties of the Church.

During the government of Napoleon the collection increased, as a result of which they renamed it the Napoleon Museum. However, after its abdication, several works were seized and returned to their original owners.

During the Third Republic (in French: La Troisième République – 1870 to 1940) the pieces grew constantly due to donations and legacies.

The collection was divided into 8 curatorial departments to better compose the collection:

Although it is a place that takes hours to exhaust all works and objects in order to enjoy them significantly (most people prefer to visit on several days) it is exciting to be in front of Monalisa (Leonardo da Vinci) or the work Liberty Leading the People, by Eugene Delacroix, among many others.

Monalisa, in fact, always imagines a larger, more imposing painting, since we are faced with a 50×60 cm work, placed in a square glass dome, in a room that we can barely get into, such a large number of visits that the painting receives. Still,

Leonardo da Vinci’s work fascinates with the stories of both the artist and the painting itself.

In the virtual tours you can appreciate some of the collections of this immense museum and thematic exhibitions.

We count on you:

In the comments you can share with all colleagues suggestions and links for visits, initiatives, shows or online exhibitions.