What is analysis in art ? We invite you to read 1 practical example

In this article we will see what analysis in art is with an example of a work by Juan Gris, known as the “master of disguised images”.

Analysis in art means understanding the formal aspects of a work of art and its historical context.

But it also means understanding the artist’s intention and the more or less obvious ways in which this intention is expressed.

We could say that analysis in art implies 3 steps:

Next, let’s see how this applies to Juan Gris’s painting Still Life with Checked Tablecloth.

Analysing art with the online courses 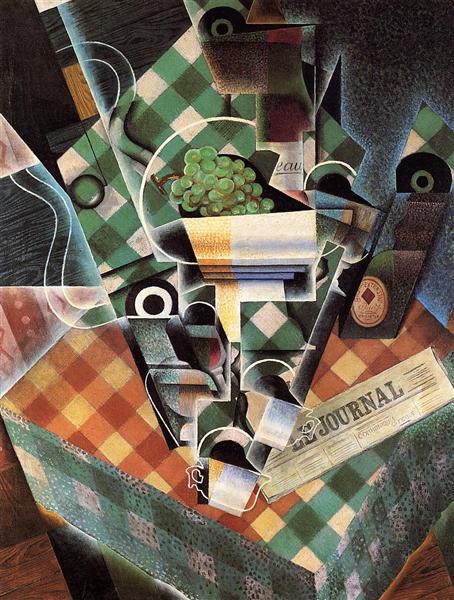 Material: oil and graphite on canvas.

Condition: [no information; it is presumed good].

The painter deconstructs objects in a radial “explosion” of carefully coordinated

geometric shapes to create the impression of simultaneity of perspectives.

He also uses an imitation of the papier-collée technique (newspaper folded on the table and detail next to the bottle, where you can read “EAU”).

Composition: The composition is determined around the table.

In the center there is a fruit bowl, grapes, bottles, glasses and cups.

A newspaper is also placed on the table top.

The tablecloth pattern spreads a little throughout the composition, in a game of simultaneity of plans typical of Cubism.

Likewise, the cup itself is unfolded in two symmetrical views.

The painter chose to draw white curved lines (equally symmetrical) on the left side of the canvas to represent a guitar.

The entire composition is a game of reflections and lines whose continuity is not broken.

The colors are soft, but used without shyness, predominating the green and white checkered (and respective nuances), but also red, yellow and blue.

In the background, we have a smooth wall on the right side.

A simulation of wooden floor boards, which are still present on the left side of the canvas, as if projecting the same on the wall, merging with details of another pattern and the tablecloth plaid.

Note that in the lower corners the wood has a natural brown color, while in the left and upper sides it has the same blue-green color as the opposite wall.

By the date made by Gris himself on the back of the canvas, this painting is framed in

Also, analyzing the composition, it is easy to reach this conclusion:

Gris was marked among the other Cubists for preferring clearer and orderly images, being seen as a purist.

In this painting, he presents us a classic theme of Cubist painting – still life.

It has cups, wine glasses, a tall fruit bowl (with green grapes), a bottle of red wine, a bottle of Bass stout (distinguished by the red diamond logo), a newspaper and a guitar on a table. .

At first glance, it appears to us as a typical image of a study of Cubism: the simultaneity of planes and the play of perspective.

However, there is an aspect often ignored in this painting, which is the formulation of another latent image through the various unfolded elements that we find on the canvas.

Gris is known by some critics as the master of disguised images.

In fact, it is believed that in this painting, in addition to the objects already listed, the head of a bovine can be seen. 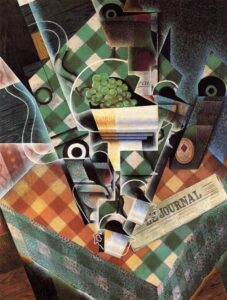 Analyzing the objects, their position and the perspective lines chosen by the painter, we can distinguish the animal:

Another detail pointed out in some reviews concerns the letters «EAU» on the bottle label: they seem deliberately to refer to «bEAUjolais» (a type of wine produced in France), but they can also be a part of the French word for bull: «taurEAU».