In this article, find out who was Charlemagne and what are the historical sources for the knowledge of the founder of the Carolingian dynasty.

Through his political reform achievements, Charlemagne helped define Western Europe and the Middle Ages in Europe.

The Frank kingdom of the 8th century was formed by the commitment and military ingenuity of Clovis and his descendants. Then, with Pepin of Herstal, Charles Martel and Pepin the Short, it became the strongest and most powerful of the European barbarian kingdoms, and the prologue to the empire that would be built by Charlemagne, son of Pepin the Short.

Indeed, Charlemagne (742-814) ascended the throne in 771, after the death of his rival brother Carloman.

He becomes heir to the Frankish kingdom and responsible for designing the governmental and cultural patterns that dominated all of Europe for several centuries.

His governing qualities allowed the European West to experience the first period of stability and order, after a period of constant invasions.

Who was Charlesmagne – the historical sources

The reference work on his life is the biography of Einhard. There, his appearance, his character, the various marriages he had contracted, his quality as a conqueror (“Rolando’s Song”) and his ability to manage the interests of the ruling classes, on which he depended, namely the nobility, were recorded.

Get to know the online courses about History

Who was Charlemagne | the military expeditions

Military expeditions occupied most of his life, achieving great successes thanks to the superiority of

cavalry, the strength of medieval armies.

Of his military campaigns stand out those that secured territories between the Rhine and Elbe rivers, in Bavaria, where he established the “Military Line of the East”, in the kingdom of the Avars, in southeastern Europe, and Saxony. There he became known for having executed 4500 Saxons in a single day, in retaliation for the successive obstacles he encountered during the conquest of the kingdom and in the attempts to implement Christianity.

He also implements a tax corresponding to the tenth part of the work and property that reached the royal treasury.

From all his undertakings resulted a set of kingdoms under the rule of the Carolingian dynasty and covering most of Europe, namely Saxony, Lombardy, Germania, and a swath of the territory of present-day Spain.

Who was Charlemagne | the relationship with the church

Charlemagne’s greatest success was due to the alliance established with the Church and the papacy of Rome. 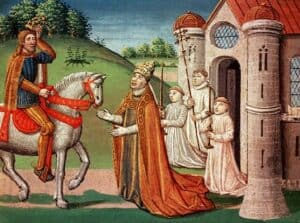 Charlemagne and the Pope Adriano I, by Antoine Vérard

In the military campaigns of this king, there were always missionaries and preachers of the Christian faith, with the function of converting and baptizing the conquered peoples, while his military and administrative body submitted them to his political power.

These events imbued his expeditions with a crusading feeling for the Church. The latter, in turn, benefited from seeing its spiritual influence extended to new domains, often also donated by kings to the papacy.

Who was Charlemagne | the emperor

Another noteworthy moment came when Charlemagne took the right opportunity to interfere in the affairs of the papacy in order to gain greater power.

However, the Pope also knew that he would benefit from an aid situation. By this time the Pope was deprived of his autonomy and independence in Italy and the throne of St. Peter was thus threatened. He then needed to restore his power by someone of undisputed authority, an emperor.
In this way, Charlemagne intercedes in favor of Leo III (successor in the papacy), in the trial to which he was condemned for heresy, and obtains that this one is exonerated.
The Pope greatly rewarded him by crowning him Emperor and Augustus of the Holy Roman Empire, a case that shook relations with Constantinople, which only recognized the Roman Emperor.

Charlemagne’s coronation as Emperor of the West had a major political impact.

The first consequence was the breaking of the legal dependence bond between the pope and the western kings and the Byzantine empire, given that the new emperor became the legitimate heir of the Roman emperors, with all their people and territories.

The coronation of Charlemagne as Emperor also had significant consequences for his descendants, insofar as there was not always the will to assume the governance of all that vast territory, being successively fragmented.

The concerns of these successor kings were systematically linked to those of the religious plane, so much so that Charlemagne himself was called a “theocratic” king, an example of which was the obligation imposed on all those over 12 years of age to swear allegiance to him and, thus, accept God’s law.

His reign was also marked by a period of cultural renaissance, as he was a sovereign concerned with religious orthodoxy and culture, protecting both through a symbiosis of influences that sought to rescue the Latin essence of the end of the Roman Empire, after the Conversion of Constantine in 312. 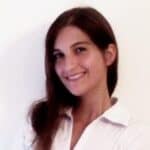