Bright colors and asymmetrical compositions, clear and sinuous lines, representations of simple everyday moments, small breaks for pleasure, nature or even portraits of celebrities: these are some elements of ukiyo-e prints, the Japanese art in the Edo period.

Between 1600 and 1860, popular culture flourished in Japan, and with it, the art of ukiyo e – the “pictures of the floating world”. 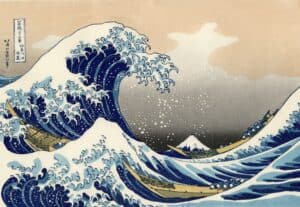 The Great Wave off Kanagawa, Engraving by Katsushika Hokusai, c.1830

In fact, the people of the time well deserved these pleasures.

Between the end of the 16th century and the beginning of the 17th century, Japan was going through a period of intense turmoil and internal conflicts.

In 1600 the Battle of Sekigahara, the “division of the kingdom”, finally brought the Tokugawa shoguns to power and after that , Japan had a long period of peace.

The popularization of art in the Edo period

The technique helped: since the 8th century, Buddhist texts already used woodcuts. It was from the 16th century that other works also began to be printed.

The low cost of prints meant that Edo period art was no longer the prerogative of the elite. Thus, the simpler people could also have access to these works.

Care with colors was also considered, after all, this was important to make the prints more attractive as merchandise. 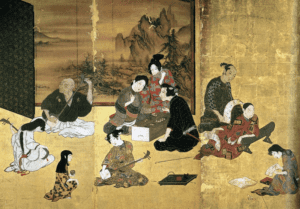 From the beginning, most of the prints were already colored by hand with a few shades of color, but it was not until 1740 that the benizuri e appeared, polychromatic engravings, with printing in red and pink and green areas.

The colors were produced from vegetable inks added to the black outlines.

The first illustrations from the Edo period were anonymous.

(1618-1694) was one of the artists who contributed to the popularization of ukiyo e as he began to publish images in independent prints of text (many works were linked to books on a variety of subjects).

This made the prints fall even more in the public’s taste.

In one of his works, he plays actors performing a kabuki drama. These actors were elevated to celebrity status in Edo and therefore were frequently portrayed. 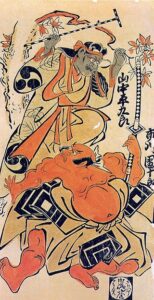 (1753-1806) is one of the best known ukiyo-e artists, especially for his work The Great Wave off Kanagawa, which you can see at the beginning of this article.

This artist, in particular, had his work widespread in Europe, notably France, and greatly influenced the Impressionists. 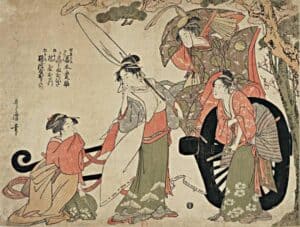 Episode of the fight between Michizane and Fujiwara, Kitagawa Utamaro, date unknown

Engravings with images of the floating world also played a key role in modern European avant-gardes.

Japanese art inspired many European artists in the late 19th century, especially Impressionist and Post-Impressionist artists, as well as having influenced Art Nouveau.

Vincent van Gogh was one of the painters to be inspired by Japanese art.

Japonism is manifested in Western Art mainly through the simplification of colors and perspective.

However, it could not be said that it was a copy of the Japanese artistic process, but a meeting between both cultures and artistic expressions. 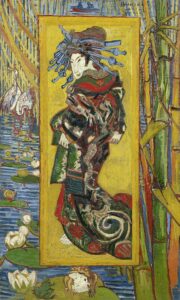 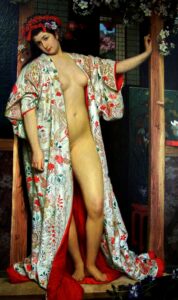 In fact, by the end of the 19th century, the European market saw an influx of Japanese products of different kinds, among them japanese art, thus initiating Japonism.

A kind of European reinterpretation that integrates Japanese styles into objects of the western art.

We also share a video from the van Gogh Museum about the influence of Japanese art on Vincent van Gogh’s work.