Guggenheim Museum Bilbao – Why do we go to the museum?

In the heart of Bilbao, in the Basque country, the Guggenheim Museum Bilbao was opened in 1997 and has itself become a work of art in 20th century architecture.

This building, by Frank Gehry, changed not only contemporary architecture but also the very concept of a museum.

In the first year of its existence, tourism funds exceeded four times the value of the building and, in less than a year, it attracted more than 1,300,000 people, more tourists than the Prado Museum (the first art museum in Spain) .

A study revealed that 80% of visitors admitted that they went to the Guggenheim Museum more for the building than for its collection.

It is one of the most important institutions of modern and contemporary art founded in 1937 – the prestigious Solomon Robert Guggenheim Foundation – directed by Thomas Krens.

In addition to the museum in Bilbao by Frank O. Gehry, it also has the “Peggy Guggenheim Collection” in Venice.

Peggy was the niece of the modern art collector Solomon and the daughter of one of the victims of the Titanic, from whom she inherited a considerable fortune.

She moved to Paris, where she learned to understand modern art and formed a collection of her own.

This was ceded to the foundation in 1976. 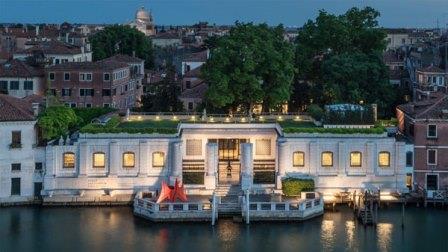 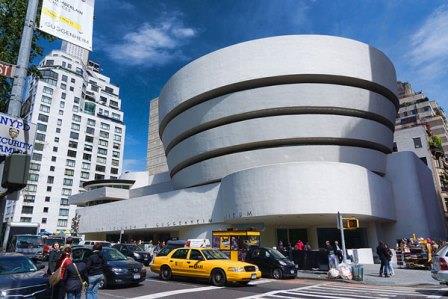 The foundation also includes the “Deutsche Guggenheim” in Berlin and the “Solomon R. Guggenheim Museum ” in New York.

This one was the foundation’s first museum, opened in 1959 and designed by the famous Frank Lloyd Wright, who conceived a white spiral building.

An example of 20th century avant-garde architecture, which represents a bolder and more entertaining facet, giving the building an unmistakable appearance.

It has been compared to a whale, a futuristic vessel moored ashore and a rose with titanium petals.

Whatever the allusion that our brain makes, it is indisputable that these are innovative forms in one of the most spectacular feats of architecture of the last century.

After its construction, which lasted four years (1993-1997) and was heavily marked by harsh criticism and controversy, the museum opened its doors to a public that arrived in the Basque capital with a much greater turnout than expected.

People traveled to see the building, as did pilgrims to cathedrals and basilicas.

It was responsible for transforming the local economy and the proof that culture is a factor in economic development and tourism promotion.

Approximately one million people visit the institution annually, of which two out of three are foreigners and eight out of ten do not come from the Basque Autonomous Community.

These figures are responsible for the self-financing of about 70%, with only 30% of public aid, enviable values for this type of non-profit institutions.

The materials and construction

The structure of the Guggenheim Museum Bilbao, over 50 meters high, close to the estuary, does not exceed the surrounding buildings and is crossed at one end by the colossal bridge La Salve, next to the docks in the center of Bilbao.

It consists of several curved volumes twisted and intertwined at random, coated with 33,000 titanium plates with a thickness of half a millimeter.

As if it were a metallic skin, or fish scales that combine with the limestone and the glass curtains of the building. 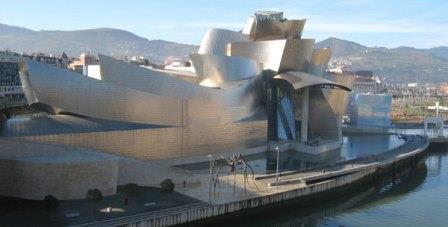 The metal guarantees a lifetime of one hundred years and attracts a lot of attention, despite being textured so as not to reflect too much light.

The limestone used came from Granada and was chosen for its color and texture.

The glass, in turn, provides the building with transparency, illuminating the exhibition rooms, simultaneously protecting them from heat and radiation.

The animated, sculptural and unconventional shape of the Guggenheim Bilbao, which arouses the curiosity of the observer, was meticulously calculated by computer by the CATIA program (computer aided three-dimensional interactive application) developed by Dassault Aviation in France, for the construction of the aviation industry. aeronautics.

A challenge that would not have been possible without the help of the computer and the talent and experience of Gehry and his team.

From the vast collection of museums, there is usually at least one piece that becomes better known, that stands out and of which they are proud, becoming the hallmark of the institution.

In the Guggenheim Museum it was the building itself that became its symbol and the reason for tourists’ visits and trips.

However, we can highlight some abstract expressionist artists at the Guggenheim Bilbao: Willem de Kooning, Mark Rothko, Clyfford Still. 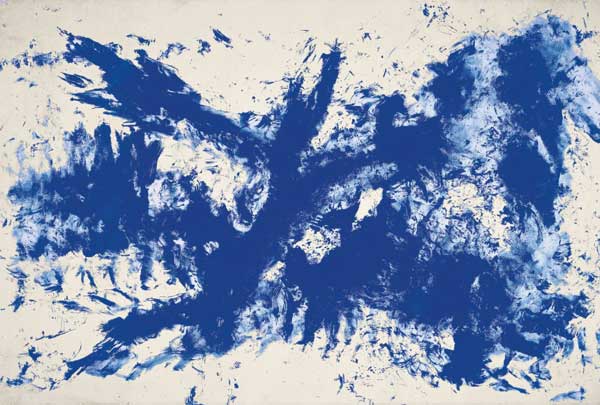 Also, Yves Klein with his “Large Blue Anthropometry”, which stands out from the museum’s collection, which exceeds 100 works by more than 60 artists.

In the extensive outdoor space of Guggenheim Museum which invites us to walk freely, it is possible to admire works such as “Maman”, a giant bronze spider by French sculptor Louise Bourgeois, almost 10 meters high. 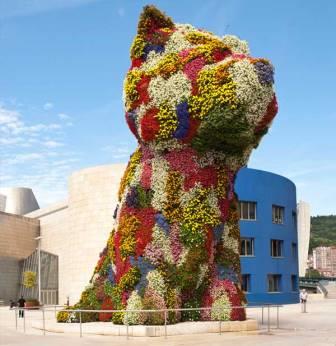 The seven colored steel “Tulips” and the famous “Puppy”, both by American artist Jeff Koons.

The last one is a west highland terrier about 12 meters tall, which welcomes visitors and has become the museum’s mascot.

Made from 40,000 natural flowers changed twice a year, on 6,500 kilos of earth and a steel structure.

These contemporary exterior works at Guggenheim Museum  as well as the organic and free forms of the building, typical of its architect and deconstructivism, invite people to enter and enjoy an innovative space and collection.

We are projected  into a new era in a highly awarded place, where art and architecture finally meet harmoniously and that forever changed the image of museums.

Get to know the online courses by Citaliarestauro.com 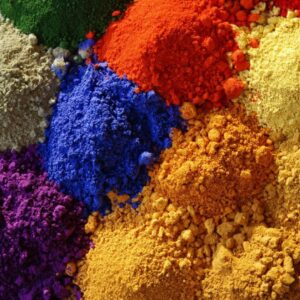